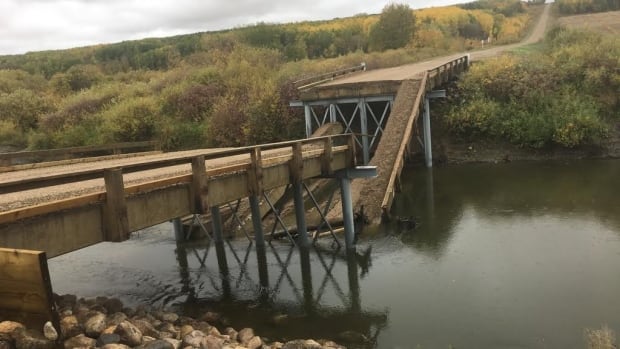 Regina engineer Scott Gullacher faces a disciplinary hearing next month over allegations he broke rules when he designed a bridge in rural Saskatchewan that collapsed just hours after it was opened to the public.

On September 14, 2018, the Rural Municipality (RM) of Clayton announced on their Facebook page that “the Dyck Memorial Bridge is now complete and open”.

Later that day, the bridge collapsed. Nobody was hurt.

In an interview just days after the collapse, RM’s Reeve Duane Hicks said that some of the pilings on which the bridge was built had collapsed.

At the time, Hicks attributed it to an “act of God”.

However, there may have been another explanation.

Hicks also revealed that the engineer who designed the bridge, Scott Gullacher, had not done a geotechnical investigation of the riverbed before installing the pilings.

After years of investigation, the Saskatchewan Association of Professional Engineers and Geoscientists (APEGS) posted a notice on its website Wednesday saying Gullacher will face a disciplinary hearing in early June.

The association alleges that Gullacher did not practice “carefully and diligently” when he designed the bridge and the screw piles that were supposed to support it. APEGS also claims that Gullacher was offering services or advice in an area outside of his professional competence.

Additionally, the association alleges that it was not “careful and diligent” in its design of bridges in four other Saskatchewan MRs, including Scott, Caledonia, Purdue and Mervin.

Those bridges are also the subject of a series of lawsuits.

The Clayton RM sued Gullacher and two companies he and his wife control: Can-Struct Systems Ltd., which describes itself as a “bridge building” company, and Inertia Solutions Ltd., which provides engineering services.

The RM has alleged that Gullacher and his companies reneged on their contract because the bridge was supposed to last 75 years but only stood for a few hours. The lawsuit says Gullacher failed to “design and/or build a bridge that would not immediately collapse.”

The suit says that “no geotechnical report was prepared to determine subsurface conditions beneath the bridge” and that “Can-Struct’s bridge design called for the use of screw piles instead of industry standard driven piles.”

The RM instructed that no geotechnical investigation should be obtained as the RM was concerned about the additional cost and delay.– Defense statement by Scott Gullacher and Inertia

In response to the lawsuit, Gullacher and his companies agreed that they had not conducted a geotechnical investigation, but insisted that it was at the request of the client.

“The RM instructed that no geotechnical investigation should be obtained as the RM was concerned about additional cost and delay,” Gullacher and Inertia’s defense statement says.

“Inertia admits that a portion of the bridge collapsed,” the statement says, “but denies that its design or specifications caused the collapse and puts plaintiff on strict probation accordingly.”

Inertia says that RM may be somewhat to blame because he decided to quit the geotechnical job. She also says that after the bridge was built, the RM “installed gravel on the bridge to a depth of 13 to 16 inches with an average depth of 14 inches, which far exceeded the specified load.”

In its lawsuit, the RM of Clayton seeks damages for the cost of repairing and replacing the bridge, and for the loss of use of the bridge.

The Scott, Caledonia, Purdue, and Mervin RMs also sued Gullacher and his companies, which built bridges in those RMs. The lawsuits note that after the Dyck Memorial Bridge collapsed, inspections commissioned by the Saskatchewan Rural Municipalities Association raised concerns about “deficiencies” in the design and construction of the other bridges.

As a result of the inspections, weight restrictions were placed on the bridges.

In response, Gullacher and his companies say the bridges are designed and built to the proper specifications and there are no problems with them. The defense statement says that “any weight restrictions imposed in connection with the bridge are unnecessary and were imposed without consultation” with Gullacher or his signatures.

According to Gullacher’s LinkedIn profile, he left his company Inertia Solutions in July 2019 and started Driftstone Consulting, a Regina-based engineering firm. He was a director and shareholder.

However, according to the company register, he resigned as a director at the end of last month and is no longer a shareholder.

CBC called Gullacher’s phone number. The woman who answered said that Gullacher would not want to talk to CBC and then hung up.

The Clayton RM contracted with Gullacher’s construction company, Can-Struct, in early July 2018 to design and build the bridge.

Earlier that year, the RM had rejected $750,000 in provincial funding for the bridge because it was subject to the province’s strict technical specifications for the bridge. RM officials believed that those requirements were excessive and would have made the bridge unnecessarily expensive.

“This bridge is beyond our needs,” Kelly Rea, then an RM administrator, said at a public forum. “We don’t need this bridge.”

CLOCK | Kelly Rea of ​​the Clayton RM expressed concern about the funding criteria for the bridge:

In other words, the “most expensive bridge” in the province would have cost the RM exactly the same as the bridge it finally approved and which collapsed shortly after its official inauguration.

At the end of last year, the RM put out to tender a new bridge.

The highest bidder and winner of the competition was Harbuilt Construction. His bid was $1,923,786.06 including taxes.

CBC has asked the RM for an update on the reconstruction project, but has not responded.