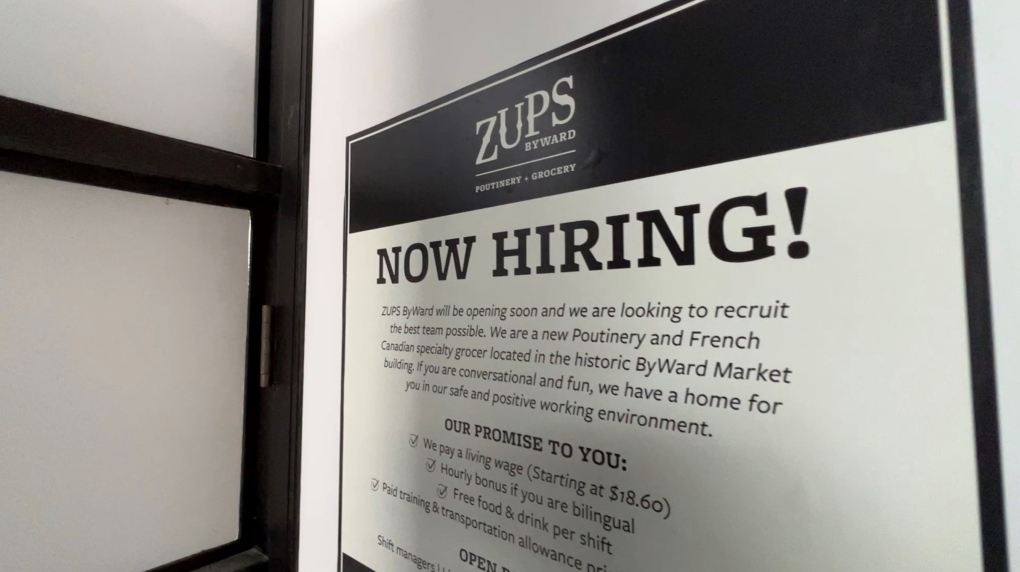 With the unemployment rate at record lows, the demand for workers continues to grow, pushing companies to find new ways to hire and retain employees.

John Hennesey is on track for the planned start of Zups ByWard’s Canada Day, which he calls a ‘slightly elevated’ poutinerie. The take-out restaurant is also a small grocery store offering French-Canadian artisan food and beverages.

“We hope to provide a destination for people to come and eat what we believe to be the best poutine,” says Hennesey. “We think we need 22 to 25 different positions to cover seven days a week and three shifts a day.”

And even at a time when staffing can be tricky, Hennesey says most positions have been filled.

“I’m offering $18.60 an hour, which is trying to offset and raise awareness of what it costs to live in this city,” says Hennesey, who also uses a QR code for applicants to submit resumes. “If you start with us and you are bilingual, we charge you from $18.60, 40 cents up to $19 an hour to start. We back it up by offering free drinks and meals and everything else we offer by giving transportation stipends to anyone who is working.”

That’s the lowest rate since at least 1976, which is the earliest comparable data is available.

The tight labor market is being driven by a strong pandemic recovery and changing demographics, which Tony Bonen, executive director of the Labor Market Information Council, says will create a very different situation than has been seen in recent decades.

“Workers in general will have a little more bargaining power in the labor market in the future,” says Bonon.

“It could mean that wages will continue to rise in particular for lower-earning workers and helping to reduce the earnings gaps we see. … In the longer term, there is also the potential for companies to innovate around this new reality to find more efficient ways of doing business and more efficient ways of finding retained and trained workers in their business.”

The construction industry has also faced severe shortages, and when skilled trades are required, John DeVries, president and general manager of the Ottawa Construction Association, says builders engage with those employees to ensure they are satisfied.

“To make sure they’re on a good career path and that they’re taken care of financially,” says DeVries. “Those are the progressive employers and I think they are the ones that will be successful in retaining their people and attracting new ones.

“But there is also loyalty, and you as an employer have to cultivate that loyalty.”

Hennesey says it’s important to get the right people for the job, and the added incentives help provide a better work-life balance.

“It may be that we are new, it may be that I have taken a different approach in the sense that I am not a restaurateur,” he says. “It’s to create an environment that’s welcoming and open so that people can come in and not feel threatened, intimidated or pressured into being hired.”