Beirut, Lebanon – As Lebanon’s election frenzy cools, the country has awakened to a new chapter in its dizzying political history.

Following Sunday’s election result, there have been changes in the balance of power in the country’s 128-seat parliament and its fragile sectarian power-sharing system.

Legislators who for many decades were constant variables in Lebanon’s political equation were removed from office. Unsung faces, inspired by the country’s 2019 uprising, were cast and could now breathe new life into an often comatose political system.

But some of the electoral euphoria is already overshadowed by the problems that continue to plague Lebanon for a third year, particularly the economy.

The Lebanese pound, already decimated in value and 90 percent below the US dollar, has plunged further. Foreign exchange reserves at the Banque du Liban, or central bank, are shrinking, and gasoline and food prices continue to rise amid fears of fuel and wheat shortages.

Experts told Al Jazeera that while Lebanon’s election result marks a critical moment in the country’s turbulent history, what lies ahead could determine whether Lebanon has any chance of viability.

The powerful Shi’ite Hezbollah party, backed by Iran, did not lose any of its seats, but political allies who helped it maintain a parliamentary majority have suffered major blows, both from rival traditional political parties and a new anti-establishment opposition.

However, neither Hezbollah nor the Free Patriotic Movement have conceded defeat, and both have declared the elections a victory.

While political alliances in Lebanon may be fluid, experts say the vote was a major blow to the once-dominant Christian party.

“I think the Aunists [Free Patriotic Movement] they will have to admit that they have objectively lost, even if they are trying to turn it around,” Arab Reform Initiative executive director Nadim Houry told Al Jazeera. 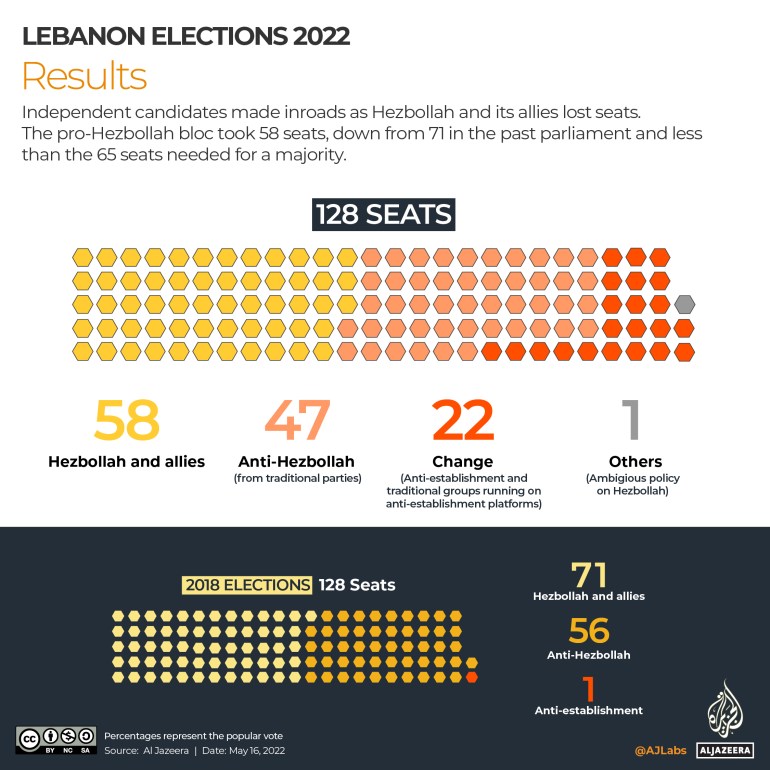 The election results could also indicate shifts in public opinion among Shia voters, the researcher said, explaining that “alternative Shia votes” could have opted for candidates outside the Hezbollah political alliance.

“[Hezbollah] they did not want to vote outside of their own political choice, and did everything to intimidate voters, candidates and their representatives in their constituencies,” Hage Ali told Al Jazeera, citing numerous statements by Lebanese election observers about the Shiite party.

As the economy continues to spiral, the new parliament does not have much time to meet and begin the process of appointing a new prime minister and forming a new government. But without a parliamentary majority that traditional factions can use to seize power together, experts believe a political stalemate is possible.

“That’s a scenario with potentially those in the middle [opposition] trying to mediate, but not enough to impose an agenda,” Houry of the Arab Reform Initiative told Al Jazeera.

Lebanon’s prime minister is Sunni, and the government is divided between the country’s multitude of religious sects and the different political forces in parliament. This fragile system of shared power can quickly lead to paralysis.

“Lebanon is a very difficult country to govern and has a very divided parliament,” Houry said.

With Hezbollah’s rivals, the pro-Saudi and pro-US Christian Lebanese Forces, winning new seats and potentially forming an anti-Hezbollah alliance with other candidates, the two could be neck-and-neck in negotiations to form a new government. This comes less than a year after supporters of both parties clashed in Beirut, killing six people in scenes that resembled the country’s civil war.

And after almost a year of exchanging blows in the media and on the streets, both parties will now challenge each other in the political arena.

Hezbollah has already insisted on a “national unity government” that includes representatives of all political interests in the country, while the galvanized Christian Lebanese Forces want a government with minimal influence from their political opponents.

Lebanon is no stranger to political paralysis.

It took politicians 13 months of negotiation to form the current government under Prime Minister Najib Mikati.

New political deadlocks will also come at a high price, especially with the failing economy and an interim government that will be unable to introduce new laws or do anything more than the basics.

Houry says that if there is no compromise on either side, then a “total deadlock” in the political system can be expected.

“I think Hezbollah will have to make some compromise. The question will be how much?

There may be compromise on some internal issues, such as corruption, rather than Hezbollah’s military power or its involvement in regional conflicts, he said.

“But another question is whether the Lebanese forces and their allies decide to push things forward or not: you can’t corner Hezbollah because you have a majority in parliament. It just doesn’t work that way,” Houry said.

This is a political scenario that is eerily similar to that of Lebanon after 2005.

At the time, there were two clearly divided factions in terms of their position in relation to Hezbollah’s weapons and the movement’s allies in Syria and Iran. It was a period marked by political paralysis, mass protests, assassinations and even some armed conflict.

“This could be a repeat of what happened after 2005, where they block things institutionally or on the streets,” Houry said.

“The ball is in your [Hezbollah’s] court whether they decide to facilitate or not.”

Hope for the opposition?

More than a dozen new members of parliament, dubbed the forces of change, have entered the political fray as a result of Sunday’s vote.

Most are fresh faces hoping to represent the mood of the popular uprising against the status quo that took place in late 2019.

They have promised to fight corruption, push for sound government policies and breathe new life into Lebanon’s political sphere.

Around a dozen other candidates stormed parliament to run on somewhat similar anti-establishment platforms.

“These alternative voices will try to raise the bar when it comes to socioeconomic issues that people really care about,” explained Hage Ali, a researcher at Carnegie Middle East.

On the other hand, Hage Ali sees Hezbollah and some of its opponents, particularly the Christian Lebanese Forces, trying to move politics towards sectarian disputes and weapons issues and more “abstract issues that have little to do with the problems of daily life.” in Lebanon. ”.

Similarly, Houry foresees that the ideological diversity of the new anti-establishment parliamentarians will pose challenges that will have to be overcome.

“I suspect that in a way there will be a core group that will come together … some alliances of convenience on the basis of an issue,” he said.

Some of these new MPs confirmed this to Al Jazeera, explaining that discussions will soon begin to form parliamentary blocs based on common political platforms, while exploring possible alliances for common positions.

All of this could take time and a political deadlock could hamper such plans.

“To get there, there is the first major element of the business, which is to form a government and have an agenda,” Houry said.

Hage Ali believes that the Christian Lebanese Forces and their allies could attempt to “squeeze” anti-establishment lawmakers out of the political discussion and then focus broadly on challenging Hezbollah, rather than economic reforms and accountability.

“I think the kind of politics that the Lebanese forces and their allies, particularly their Sunni allies, will introduce will pose a much greater dominance of the public sphere,” Hage Ali said.

“That would not allow civil society and independent groups to have much of a say in how to move things forward…but I hope that in the next four years they will try to get the debate back to where it should be.”