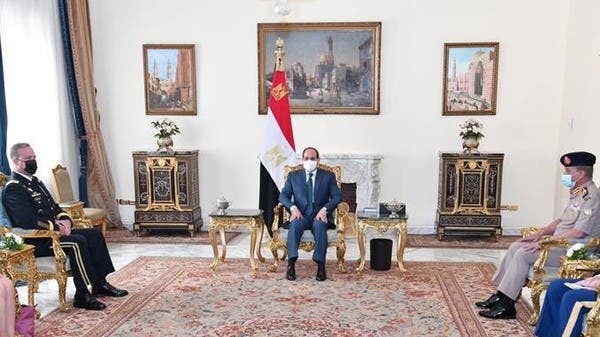 Egyptian President Abdel Fattah al-Sisi expressed hope for closer US anti-terror ties during talks with a senior US general on Monday, following a deadly attack by militants in the Sinai Peninsula over the weekend. a US military official said Monday.

The attack was claimed by ISIS and killed 11 Egyptian soldiers. The militants descended on a checkpoint at a water pumping station, attacked with a vehicle equipped with explosives and fired heavy weapons from pickup trucks, Egyptian security sources said.

It was one of the deadliest attacks in recent years in North Sinai.

US Army General Michael “Erik” Kurilla, who oversees US forces in the Middle East, said after Monday’s talks in Cairo that the attack underscored the continuing threat from extremists.

“I offered my condolences and my opinion on the threat of ISIS,” said Kurilla, head of the US Central Command.

Sisi’s office said in a statement after his meeting with Kurilla that terrorism was the main challenge to Egypt’s security and stability and required “collective efforts to combat it.”

Since 2018, the Egyptian military has expanded its control over the populated coastal areas of North Sinai between the Gaza Strip in the east and the Suez Canal in the west, allowing the return of some civilian activities and the development of some infrastructure.

However, sporadic attacks have continued with militants seeking refuge in desert expanses south of the coast and using different tactics, such as sniping or planting explosives.

A senior US military official, who spoke on condition of anonymity, said Sisi and other Egyptian officials sought a deeper counterterrorism relationship in meetings with Kurilla on Monday.

The US military official added that Kurilla has offered to send US Rear Admiral Mitchell Bradley, who leads US special operations forces in the Middle East, to Egypt to offer “additional guidance and assistance.”

Kurilla’s visit, his first since he took command of US Central Command in April, comes less than four months since President Joe Biden’s administration announced it would cut $130 million in military aid to Egypt over concerns. of human rights.

The rare US censorship of a geostrategic ally that controls the Suez Canal followed Egypt’s failure to address specific human rights-related conditions, which Washington has never publicly detailed.

Activists have said those US conditions included the release of people seen as political prisoners.

US officials have said that the US relationship with Egypt is complex. The most populous Arab country is a vital ally and key voice in the Arab world. US military officials have long emphasized Egypt’s role in speeding the passage of US warships through the Suez Canal and allowing US military aircraft to fly over.

Kurilla told reporters traveling with him that the relationship between the United States and Egypt was critical and that his visit gave him “a new appreciation of Egypt’s leading role in the Middle East.”

“This strategic partnership is important to me, the US and CENTCOM,” he said, using an acronym for Central Command.

Despite deep ties to the US military, Egypt has moved to diversify its weapons sources since then-US President Barack Obama froze military aid to Egypt in 2013 after the ouster of Mursi.

Egypt’s arms imports from Russia, France, Germany and Italy have increased, according to data from the Stockholm International Peace Research Institute.

Still, Kurilla’s predecessor in office, Frank McKenzie, a now-retired four-star Marine general, told Congress in March that he believed the United States would provide Egypt with F-15 jets, made by Boeing.

That sale has yet to be formally announced.