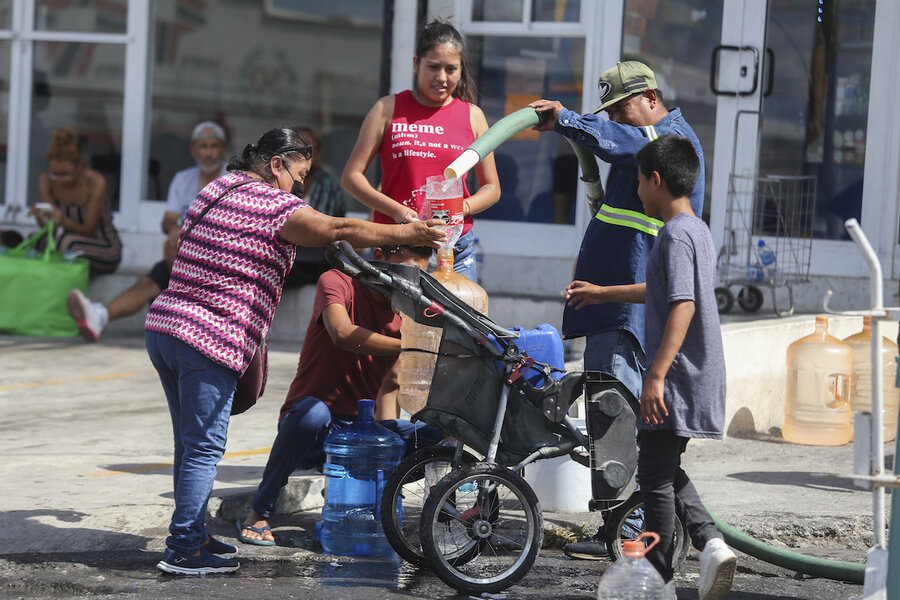 The industrial center of Monterrey has long been one of the most prosperous cities in Mexico, so its almost 5 million inhabitants were shocked when they lost the most basic service: water.

A combination of intense drought, poor planning and high water use has led residents of industrial powerhouse Mexico to resort to extreme measures that evoke images of isolated, poorer areas: storing water in buckets to use a tablespoon at a time. .

“We are panicking, because we don’t know when the water will return,” said María del Carmen Lara, a resident of Monterrey. “We finally got a tanker sent to us, but we still don’t have running water.”

Local authorities began restricting the water supply in March, when the three dams that help supply the city dried up. They are currently only 45%, 2% and 8% full, and city officials say the two lower dams only had a few days’ worth of water left. Earlier this month, they declared that the water would be available for only a few hours in the morning each day. But the authorities have not even been able to supply that, and in thousands of homes not a drop has come out of the taps for weeks.

Mrs. Lara and her husband have not had running water for three weeks and do not have enough money for holding tanks to store a significant amount. As a stopgap measure, some of the city’s suburbs have installed giant plastic water tanks in public squares for residents to fill the containers with water. So on a recent hot, sunny day, they were busy hauling buckets and containers to a water tanker to fill them.

Large, expensive, and sometimes corruption-ridden water management schemes have come and gone, but a lack of long-term planning or conservation remains. One project, which would have built an aqueduct to bring water from the Pánuco River, 500 kilometers (310 miles) away, to the city, which authorities claimed at the time would ensure the city’s water supply for 50 years, was abandoned in 2016 due to alleged corruption in the granting of contracts by the previous administration.

Experts say it was clear a crisis was looming: For six years, Monterrey, the capital of Nuevo León state, has suffered below-average rainfall or outright drought.

Located on an arid plain against the backdrop of the Sierra Madre Oriental mountain range, water, except during brief and catastrophic floods, has never been abundant in Monterrey. For decades, state water planning essentially boiled down to waiting for a hurricane in the Gulf to swell local rivers.

Juan Ignacio Barragán, the city’s water director, said Monterrey has been hit by a double whammy of drought and higher temperatures, which has depleted the city’s reserves. This May, the state reported its highest average temperature ever, reaching highs of 104 degrees F.

“This is a situation that has forced us to ration water, in order to distribute it more equitably throughout the city,” Barragán said. He accused the previous administration, which governed the state from 2015 to 2021, of allowing the extraction of water from high-level dams without considering the impacts that the prolonged drought had already caused to the state’s water sources.

Barragán said the city has started an effort to urge city residents to use less. Historically, the average daily consumption in Monterrey has been around 160 to 170 liters (42 to 44 gallons) per day per person, well above the World Health Organization’s recommendation of around 100 liters (26 gallons). per day.

About 60% of Monterrey’s water comes from dams and the rest comes from public wells. The state also has private wells, which are drilled by homeowners, ranchers and companies with strict limits on how much they can pump. But those limits often appear to have been ignored, and some wells may have been surreptitiously drilled, according to state and federal officials.

And it’s not just Monterrey. According to the North American Drought Monitor, a cooperative effort between drought experts from Canada, Mexico and the United States, 56% of Mexico is experiencing some level of drought.

All of Nuevo León is “abnormally dry” or in drought. The natural weather phenomenon La Niña and climate change may be factors in the unusually low rainfall, according to officials and experts.

“For those who don’t believe in climate change, here are the consequences,” said Nuevo León Governor Samuel García. “This is clearly the result of climate change: a semi-desert area becomes drier.”

Brenda Sánchez, a former official with the federal Environment and Natural Resources Secretariat who now serves as a local legislator in Nuevo León, agreed, saying urgent action was needed to combat the “real-life consequences” of climate change.

For now, the authorities’ response to water shortages has been more of the same: dig more wells, reservoirs and dams. A fourth dam is currently being built in the southeast of the state and an aqueduct is planned to transport water from the El Cuchillo dam, the largest in the state. Authorities are also seeking to stop the illegal grabbing of water from the rivers that feed the dams and have tried to get large corporate water users to share some of their water rights with city residents.

Rosario Álvarez, an activist with the environmental group Pronatura Noreste, said the government’s plans are too few and too late.

“The most recent problem is that we haven’t planned for a drought like the current one,” Ms. Álvarez said. “We have had several years with below-average rainfall, we have not had hurricanes.”

“What came together was the lack of significant infrastructure, the lack of understanding of the characteristics of the region where we live, and the mismanagement of what little water we have,” he said.

Meanwhile, until the next hurricane moves through the Gulf of Mexico, and there is none in sight, anger is growing among residents and street protests have broken out in Monterrey.

“We are fed up,” said Mónica Almaguer, a resident of the San Nicolás neighborhood. “They have not even complied with the schedule in which they said there would be water. I’ve been without water for 35 days.”

Gabriel Revillas, who has also been without water for several days, filled a jug at a private purified water supplier.

“The only thing we can do is pray, pray for a miracle,” he said.

This story was reported by The Associated Press. Suman Naishadham contributed to this report from Washington, DC