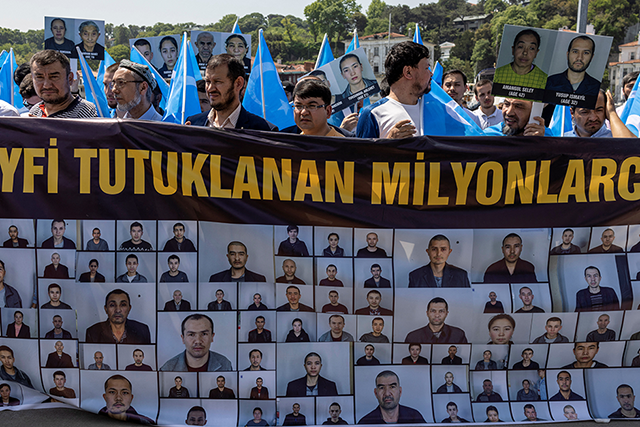 I was recently interviewed about the war in Ukraine and President Biden’s “genocide” label, which I support.

Then they asked me about the genocides in Rwanda and Bosnia. Why did the United States get involved in the former Yugoslavia but did nothing with Rwanda, where almost a million people were massacred in a hundred days? Both genocides occurred in the 1990s, and the American responses could not have been more different.

I doubted. It is painful to talk about the fundamental bias of our geopolitics. We see the opening of hearts, homes and wallets, of military arsenals and aid budgets for Ukraine and Ukrainians, but what about the Uyghurs in China? The Rohingya in Myanmar and Bangladesh? The millions at risk in Ethiopia, Syria, Darfur, Yemen and Afghanistan?

The victims have one thing in common: they are not white.

A Uyghur friend of mine sent me a touching note.

“If the world was as united by the Uyghurs as it is by the Ukrainians, the Uyghur genocide would have stopped. I am amazed how the world community has come together for the Ukrainians but ignores the others. Not only governments around the world but also civilians showed their humanity. Almost all Hollywood celebrities defend the Ukrainians, which makes me happy, but they choose sides. When it comes to the Uyghurs, they are all mute. Very sad. Uyghurs, Syrians, Yemenis, Rohinga are ignored. At least the world is defending the Ukrainians, so we haven’t lost our humanity. This gives me some hope.”

A World Without Genocide research team is speaking with Uyghurs in the American diaspora. The Uyghurs are a Turkic Muslim people located mainly in Xinjiang, a province in western China. Many have come to the United States fleeing a genocide perpetrated by the Chinese Communist Party, the CCP.

Since 2017, more than a million Uyghurs have been incarcerated in concentration camp-like facilities. People are tortured and raped. Some detainees are released, only to be sent to prison for up to 20 years for alleged crimes such as reading the Koran. Their children have been forcibly removed from their homes and placed in “boarding schools”.

Women are being sterilized at rates that show a 60 percent drop in fertility in recent years. Men and women have had their bodily organs forcibly removed. Uyghurs have been shipped across China to be used as slave labor in factories that make products for Abercrombie, Gap and more than 80 other international companies.

What has been the global response? Some Chinese officials have been sanctioned. A US bill has been passed to prevent the importation of products made with slave labor, but the bill only applies to products made in Xinjiang, while forced labor factories exist throughout China.

The US Holocaust Memorial Museum and several countries label the CCP’s atrocities as genocide. A court without any legal authority has declared that the CCP is perpetrating genocide. And that is.

On the contrary, the United Nations censored Russia and removed Russia from the prestigious Human Rights Council. The UN has provided millions of dollars worth of food, water and shelter to thousands of Ukrainians. Nations around the world have sent billions of dollars worth of weapons and humanitarian aid. Both the president and Dr. Biden have visited Ukraine. The United States increased the quota for Ukrainian refugees to 100,000 and has expedited their admission.

But the United States has done nothing to help the Uyghurs. NO Uyghurs have been admitted since 2019. Many of the 10,000 Uighurs in the US have been waiting years for their asylum claims to be processed.

The Uyghurs we have spoken with have loved ones in China who fear for their lives. Uyghurs in the US who speak out about the persecution their parents and siblings face in China are harassed by the long arm of the CCP in what is called a transnational crackdown. One Uyghur woman told me, “They are taking the lives of our loved ones hostage.”

The Uyghurs need more than hope.

We could increase the admission fee for Uyghurs and speed up their asylum applications.

Ellen J. Kennedy, Ph.D., is the executive director of World Without Genocide, a human rights organization based at the Mitchell Hamline School of Law, and an adjunct professor of law.

Do you want to add your voice?

If you’re interested in joining the discussion, please add your voice to the comments section below, or consider writing a longer-form Community Voices letter or comment. (For more information on Community Voices, see our Submission Guidelines.)