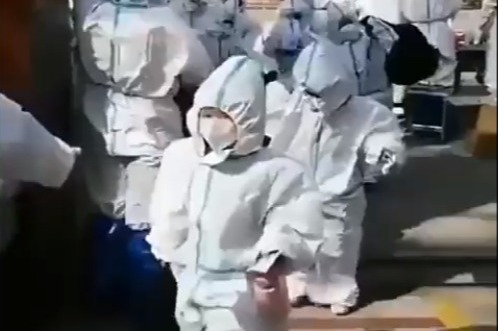 The dystopian clip sees a group of youngsters covered from head to toe making their way to school during the world’s strictest lockdown.

The children, who appear to be of elementary school age, also wear face masks, leaving only their eyes visible.

The troubling scenes come earlier this month, harrowing footage showing young children screaming like mad after they were forcibly separated from their parents and kept in cages.

Shanghai’s 26 million residents have been locked in an extremely strict lockdown for more than five weeks, with Chinese authorities justifying it as a way to control the city’s Covid cases.

China’s most populous city reported a record number of positive cases on Saturday and other areas of China tightened controls as the country maintained its zero-Covid approach. 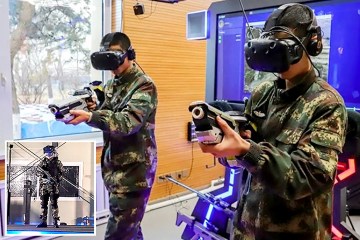 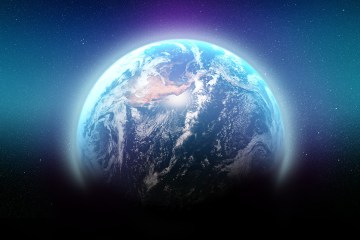 Shanghai is struggling to contain the outbreak with more than 20,000 Covid cases a day reported for at least 10 days.

Most of the city’s residents are stuck in their homes, with chilling images showing ordinary citizens spontaneously screaming in despair, after being banned from leaving their homes for more than a week.

Under China’s draconian covid rules, anyone who tests positive, even if asymptomatic or with a mild infection, must be isolated from uninfected people.

Earlier this week, a disgusting clip showed police in Shanghai stuffing dozens of live cats into bags for slaughter.

Horrific footage also showed police in hazmat suits dragging a man out of his Shanghai apartment.

In video shot from a nearby building, the man backs onto his balcony to escape, before appearing to be felled by some kind of stun gun.

The cruel approach to handling Covid has shaken the city to its core, causing mass panic, anxiety and outrage among horrified residents.

In a shocking video that has gone viral on Chinese social media, hungry shoppers have stormed a Shanghai supermarket.

Earlier this week, a pet corgi was filmed being beaten to death by a health worker after its owner tested positive for covid.

On Wednesday, President Xi Jinping said that “prevention and control work cannot be relaxed” indicating that the city had a long way to go before the measures were lifted.

Diplomats from more than 30 countries have written to the Chinese Foreign Ministry demanding an immediate end to the brutal policy.