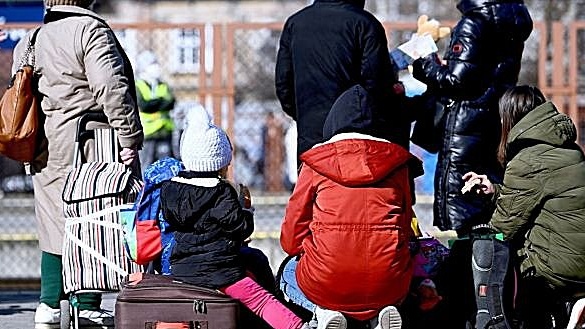 Dún Laoghaire-Rathdown County Council voted to convert a disused waste processing center into a specialist sports facility for the area.

The large industrial building is used as a “temporary rest center” for up to 300 Ukrainian refugees.

At a meeting Monday night, councilors voted in favor of a motion asking the council’s executive director to come up with a plan and hold a public consultation for the facility to become an “indoor sports/rec center” once no longer needed as a rest facility.

The building next to the Ballyogan recycling center was built several years ago as a waste packaging facility, but was never used and has been vacant ever since.

It was deployed to provide short-term shelter and services to Ukrainians, for between one and three nights, before they move into long-term accommodation.

Councilmembers also voted in favor of a motion to move forward with the development of a swimming pool and library at the nearby Samuel Beckett Civic Campus Center,

Labor Cllr Peter O’Brien said the proposed facility would complement planned recreational facilities at the Samuel Beckett Civic Center and lead to the creation of “an area of ​​sporting excellence for the county.”

Green Party Cllr Oisín O’Connor said the area needs more recreation spaces, but the facility will be required as a rest facility “for many years.” He questioned whether the council’s focus should be on the Samuel Beckett Center instead.

In a separate motion, councilmembers rejected proposals that they would record whether they attend council business in person or remotely.

During the Covid-19 pandemic, council meeting records indicated whether councilors attended meetings in person or via video link. On Monday night, council members rejected by a wide margin a proposal that would maintain this practice.

The vote means there will be no distinction in the council minutes as to whether a councilmember was physically present or tuning in remotely. Labor Cllr Denis O Callaghan ruled in favor of distinguishing in the records between councilors who attend in person or remotely.

“We are talking about public transparency,” he said. “Statutory bodies should be as open and transparent as possible.”

He said that the council had previously agreed that types of assistance should be noted and that for some reason that is now being changed.

Green Party councilor Eva Dowling said no distinction should be made and meetings “should not be two-tiered”.

She recalled previous evening meetings she was able to attend while nursing a baby because they allowed remote attendance. “I would not like there to be an asterisk next to my name to diminish my participation. Maybe in that case there should be another asterisk to say that she was nursing a newborn.”

Twenty councilmembers voted to remove the distinction between physical and online attendance and twelve voted to keep it. There were five abstentions.