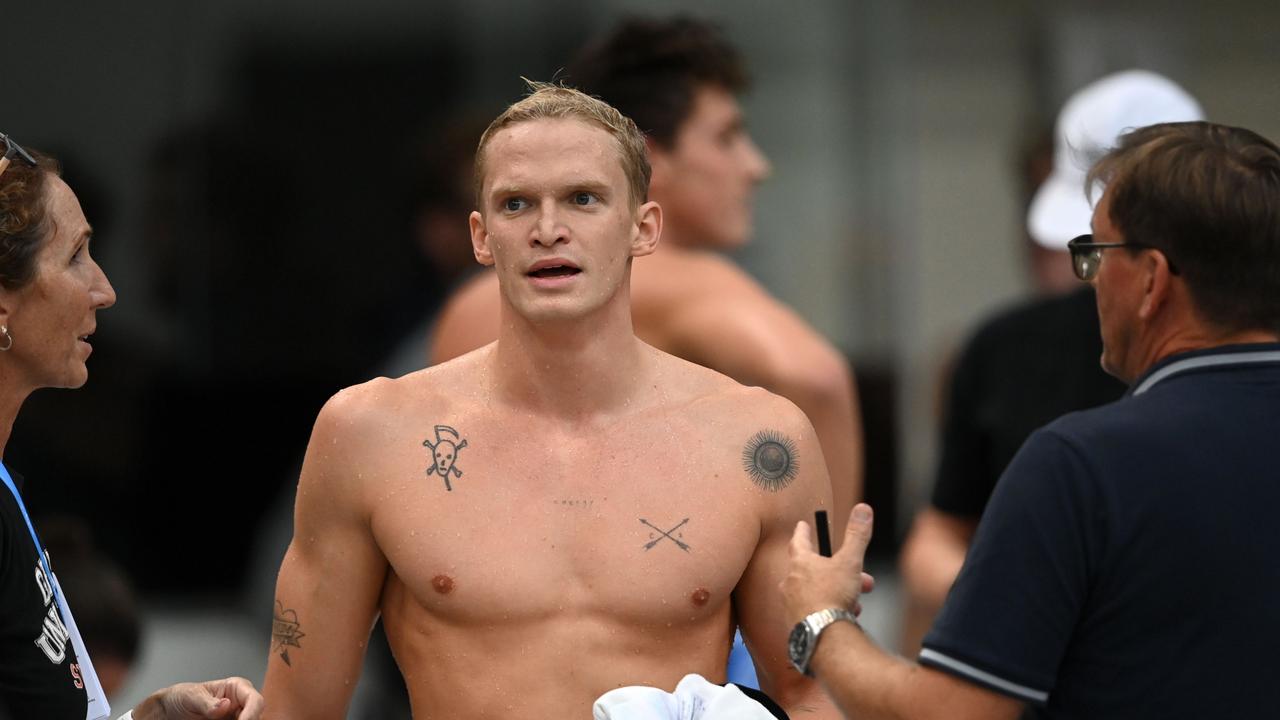 Olympic champion Kyle Chalmers has spoken the words Cody Simpson would have been dreading if the pop star’s dream was suddenly threatened.

Australian Olympic champion Kyle Chalmers says he is reconsidering his decision not to compete in butterfly at the World Championships next month.

The South Australian “superfish” dropped a bombshell on Thursday that has the potential to kill pop star Cody Simpson’s dream of competing at the FINA World Championships in Budapest.

Simpson seemed to have booked his ticket to the Commonwealth Games in Birmingham and a place on the Australian team for the world championships when he finished third in the men’s 100m butterfly final on Wednesday night at the Australian Swimming Championships.

Stream over 50 sports live and on demand with Kayo. New to Kayo? Try 14 days free now >

His time of 51.96 seconds was enough to qualify for the Birmingham Games after swimming a personal best of 51.79 in the heats.

Since Australia can only have two entries in the 100m butterfly event in Budapest, Chalmers has the power to drop Simpson from the team.

The 23-year-old previously said he would be skipping the butterfly due to his already busy schedule.

However, now he says he is considering a backflip.

“I’ve been back in the pool for seven weeks, I had no expectations of being part of the world team, especially in butterfly,” Chalmers said. nadando.com.

“So now I am weighing up what will be best for me and my preparations for Paris. (My) shoulders feel good, mind feels good, so I wouldn’t mind being part of the team.”

Chalmers’ new statement comes after Australian swimming head coach Rohan Taylor confirmed before the race that if Simpson finished third and achieved the qualifying time, he would make the team for the world championships.

Chalmers entered the butterfly events at the Australian Championships, despite never having won an Olympic or Commonwealth Games medal in butterfly.

The extraordinary situation is further clouded by reports that Simpson is now in a relationship with Australian Olympic icon Emma McKeon.

news corporation reported last week that Simpson and McKeon have been seeing each other on the Gold Coast.

McKeon and Chalmers have been romantically linked before and reports surfaced in September that they were dating.

Meanwhile, Simpson will have to wait until the end of the week for his Commonwealth Games selection to be confirmed when the team is announced.

“I had a great swim this morning, a lot of progress since last year. I’ve been working my ass off all year so it’s amazing to see results like this. I was hoping to go a little faster tonight, but going under it is a real dream.

“I had no idea what was going to happen in this match, so I’m over the moon.

“I only started training a little less than two years after 10 or 11 years out of the water. I didn’t think it would be remotely competitive, racing this year at the earliest. Potentially being part of a team is already just an advantage on the way to Paris.”