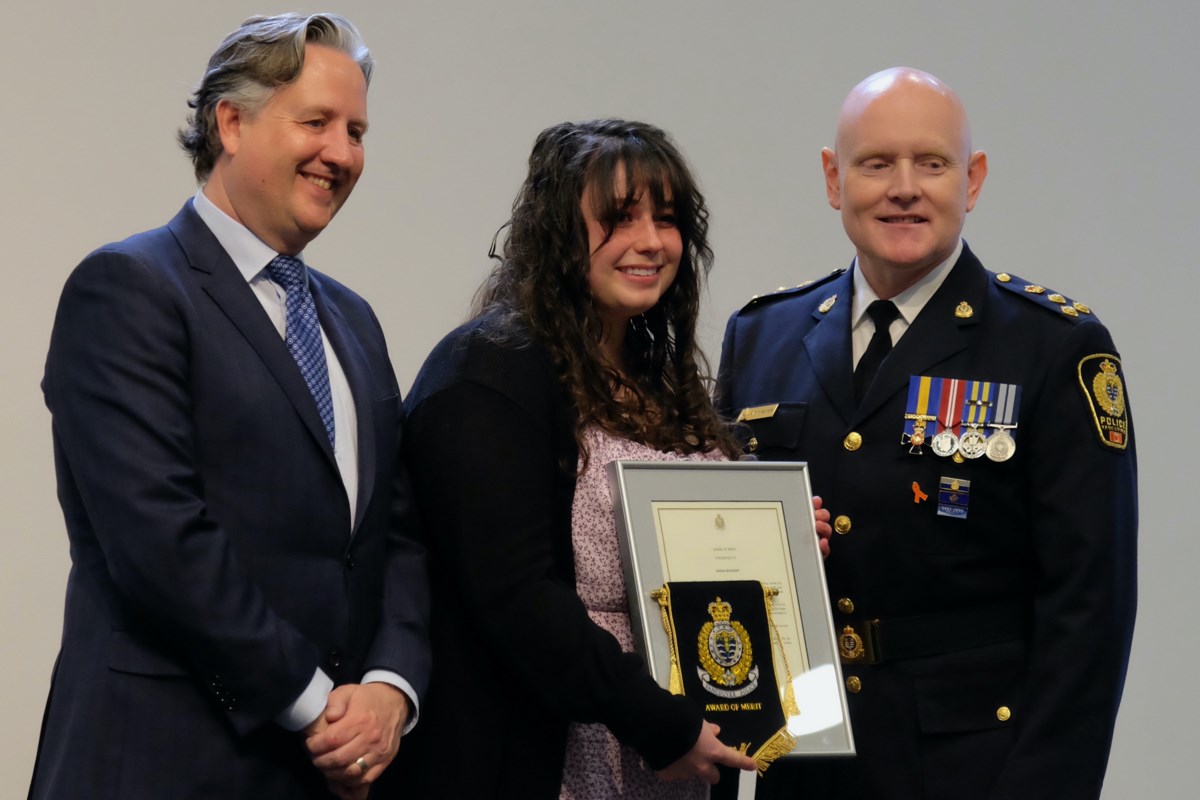 The memory of that day has nothing to do with aging, or a gift you received.

Instead, it’s the gift he gave to a stranger in a crisis.

In the early afternoon of March 2, 2021, Boisvert was driving across the Lions Gate Bridge when he noticed a woman beginning to climb over the railing.

He slammed on the brakes of his car and decided to act.

“I jumped over a railing and grabbed someone’s arm and leg who was half over the railing,” Boisvert said.

“I have been in my own bad place with mental health and tried to talk her out of it. But I think the line that really stuck with her is that I told her it was my birthday and it was my 25th birthday. She said, ‘Oh really, I’m really sorry.’ And then I held her until the cops came.”

Boisvert was one of Vancouver citizens and police officers recognized Monday for their bravery, courage and commitment to excellence through the department’s annual Commendation Awards, held at the Roundhouse Community Center in Yaletown.

Police Chief Adam Palmer and Mayor Kennedy Stewart presented Boisvert with the Award of Merit, which is given to citizens who have helped or attempted to save a life, helped prevent a crime, or helped police catch a criminal.

“Honestly, I didn’t even know this was something that could happen,” he said. vancouver is awesome After the ceremony. “I’m very grateful.”

Citizen Matthew Coulson was recognized for saving the life of a woman trapped in a caravan fire on Slocan Street last April. Coulson worked as a landscaper and stopped at a Lowe’s home improvement store to buy supplies when he heard people screaming.

He ran across the parking lot, jumped over a high retaining wall and entered the trailer to save the woman. Coulson was unable to reach a man inside the trailer, despite sustaining burns to his hand in the process.

“Unfortunately, the fire had gotten too big and Matthew was forced to give in,” Const said. Tania Visintin, VPD media relations officer, who along with Sgt. Steve Addison acted as master of ceremonies on Monday.

Other citizens recognized were Blake Harvey, Kiran Mooker, Danish Nadan for coming to the aid of three women in separate incidents on July 10, 2020. The incidents occurred at the center and were related to a man making inappropriate advances and comments towards women .

In one incident, Mooker and Nadan motioned for one of the women to get into their car, only for the man to grab Nadan by the neck and attempt to punch him multiple times, while demanding that the woman get out of the car.

Sitting in the audience with the family to hear these stories was Const. Justin Fraser, who received a standing ovation when it was his turn to be congratulated by the chief and the mayor for a call that he and Const. Gary Li replied on November 10, 2016.

Fraser and Li were the first to arrive at the scene of a violent robbery in progress at a Canadian Tire store on Grandview Highway near Renfrew Street.

The suspect, later identified as Daniel Peter Rintoul, was a 430-pound man dressed in camouflage. He had previously sprayed a can of bear spray on a 53-year-old store clerk at the “gun counter” and slashed his face and head with a knife, according to the Independent Investigations Office review of the incident. .

Rintoul had then taken an elderly man hostage before leaving the store with a knife and the bear spray. He fired the bear spray at Fraser and Li, who then fired his taser at Rintoul, allowing the hostage to run to safety.

Fraser and Li moved in to handcuff Rintoul, but he recovered and stabbed Fraser in the abdomen, shoulder, and chin. Fraser was able to free himself, drew his gun and fired. Li also fired, the bullets momentarily halting the assault.

Li and another officer then carried Fraser a few yards from Rintoul, where officers gave him first aid until paramedics could safely reach him. But then Rintoul woke up once more and refused to drop the knife or the bear spray.

The IIO incident review said three officers, identified only as Officers 1, 2 and 4 in the report, fired 10 rounds from their pistols at Rintoul, with nine of the rounds hitting him.

Rintoul was also hit twice with a Taser, five “rubber bullet” rounds from an Arwen pistol, and pepper spray. He died on the spot.

The IOI cleared the officers of any wrongdoing in the November 2016 shooting death.

Fraser, who received the Valor Award for his actions that day, declined an interview after the ceremony, saying he wanted to spend time with his family and colleagues, including those who responded to the robbery.

‘I answered the call that day’

Sergeant Ryan Irving was a member of an emergency response team at the time of the incident. Irving has medical training that he used that day with a store clerk and with Fraser, whom he was glad to see at Monday’s ceremony.

“We all come in knowing it can happen, but we live in Canada and you don’t think it’s going to happen, but sometimes it does,” Irving said. “He stepped up and answered the call that day and did his job.”

Irving was among 18 officers also recognized Monday for their efforts in how they responded to the robbery, each receiving citations from the police chief.

The final awards of the ceremony went to Sgt. Police Officer of the Year Dan Ames, who was described as a tenacious crime fighter, and Civilian Professional of the Year, accountant Davina Chung, who was recognized for her exemplary work ethic.