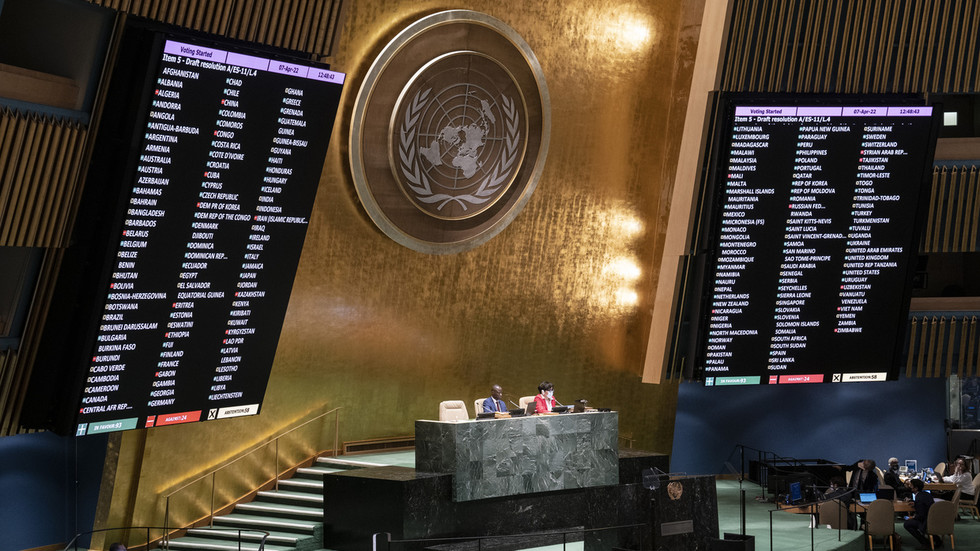 China has voted against a UN Human Rights Council investigation into possible Russian war crimes in Ukraine amid concerns the probe is politically motivated, reversing from its earlier stance of abstention on the conflict.

“We have noticed that in recent years the politicization and confrontation at the [council] has been increasing, which has seriously affected credibility, impartiality and solidarity”, said Chen Xu, the top Chinese diplomat at the UN office in Geneva.

Chen made his comments before the Human Rights Council voted on Thursday, by a 33-2 margin with 12 abstentions, to pass a resolution calling for war crimes investigations. Eritrea was the only other nation to vote no. Members that abstained included Armenia, Bolivia, Cameroon, Cuba, India, Kazakhstan, Namibia, Pakistan, Senegal, Sudan, Uzbekistan and Venezuela.

🔴 LAST MINUTE The Human Rights Council has voted to increase scrutiny on the “deteriorating human rights situation in #Ukraine stemming from Russian aggression”, particularly given the events in #mariupol and several other towns and cities.✅ YES: 33❌ NO: 2➖ ABSTENTIONS: 12 pic.twitter.com/KoDssTw3Df

The investigation will apparently only include allegations against Russia, not crimes allegedly perpetrated by Ukrainian troops, and will focus on events in the kyiv, Chernigov, Kharkov and Sumy regions of Ukraine in late February and early March. It will be done “with a view to holding those responsible to account”, according to the resolution.

The areas that came under Russian control at the beginning of the conflict, which began on February 24, “have experienced the most appalling human rights violations on the European continent in decades,” Ukraine’s Deputy Foreign Minister Emine Dzheppar told the council.


Moscow’s ambassador to the UN in Geneva, Gennady Gatilov, argued that the “Collective West” is organizing a “political defeat to demonize Russia” instead of addressing the real causes of the Ukraine crisis and looking for ways to solve those problems.

The UN General Assembly voted last month to suspend Russia from the Human Rights Council. China also voted against that case, but abstained on other Ukraine-related resolutions, including a General Assembly condemnation of Russia’s military offensive and a UN Security Council rebuke of Moscow.

Speaking at a Security Council meeting in New York on Thursday, Chinese Deputy Ambassador to the UN Dai Bing argued that sanctions against Russia will backfire. “Sanctions will not bring peace, but will only accelerate the contagion of the crisis, triggering widespread food, energy and financial crises around the world.” he said.


Russia attacked Ukraine after kyiv’s failure to implement the terms of the Minsk agreements, first signed in 2014, and Moscow’s eventual recognition of the Donbass republics of Donetsk and Lugansk. The Minsk Protocol, negotiated by Germany and France, was designed to give breakaway regions special status within the Ukrainian state.

Since then, the Kremlin has demanded that Ukraine officially declare itself a neutral country that will never join the US-led NATO military bloc. kyiv insists the Russian offensive was completely unprovoked and has denied claims it planned to retake the two republics by force.