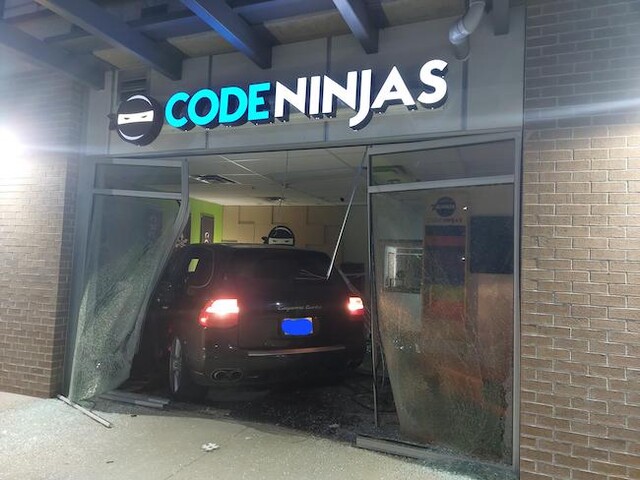 Kelowna RCMP says two men were struck by the black Porsche Cayenne, before it crashed into the building around 5am on Wednesday.

However, the victims do not cooperate with the investigators.

The driver fled the scene of the crash but was identified by police as a 40-year-old Kelowna man. Charges may be pending against the driver.

“The victims have not been cooperative in this investigation and it appears to have been an isolated incident with no risk to public safety,” states Cpl. Tammy Lobb, Kelowna RCMP Media Relations Officer. “There was extensive damage to the business and we are thankful that no bystanders were injured.”

The investigation is ongoing and is being led by the Kelowna RCMP General Investigative Support Team (GIST).

Just three months after opening its doors, Code Ninjas is now forced to close after a car crashed into the business building early Wednesday morning.

Owner Kirsten Kurjata says she was alerted to movement in the building around 5 a.m.

“I have devices that tell me when movement happens, so it beeped and I looked. I just pulled over and there’s a vehicle through Code Ninjas. When I saw it, I thought ‘not a great start to a Wednesday.'”

Kurjata says he has notified parents that Code Ninjas will be closed today and tomorrow and possibly longer depending on how much damage has been done to the building.

“There is some definite damage to the wall. We need to do an assessment. I have notified my families that we will not have school today and tomorrow and probably for the next couple of days.”

“At Code Ninjas we teach kids how to code in person. Our goal is to build teamwork and friendship in a fun environment. We’re not really designed to do work online, so I have to make a game plan.” Kurjata said.

At this time it is unknown what caused the accident.

The Kelowna RCMP and paramedics were on scene at the time of the accident. The driver’s injuries are unknown.