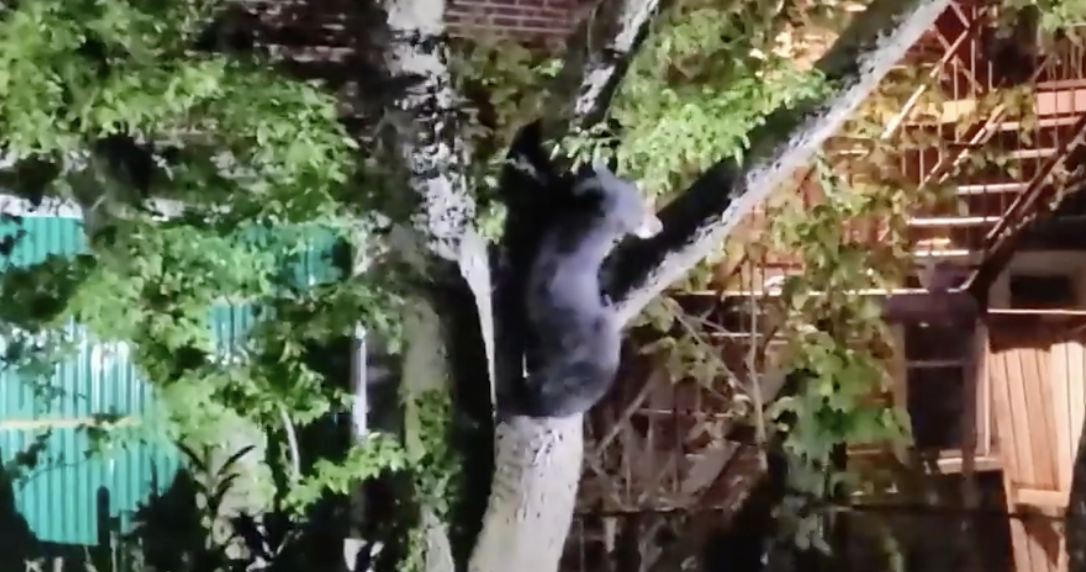 A black bear that had been seen roaming Delaware County in recent days was captured Tuesday night in Clifton Heights, where firefighters and police officers worked with rangers to corral the animal after sedating it.

Clifton Heights Fire Co. posted a nearly six-minute video on Facebook showing the bear in a tree in a yard along West Baltimore Pike. A tranquilizer can be seen on the bear’s back as rangers waited for it to take effect. After the bear hit the ground, it was placed on a tarp and seven men loaded the animal onto a tube hooked to the back of a car.

Officials said the bear will be checked and then released in a less populated area.

CHFC assisted the Clifton Heights County Police Department and State Rangers with the successful capture of the bear. The bear was located in a tree on a residential property in the 200 block of West Baltimore Pike. The bear will be checked and then released in a less populated area.

published by Clifton Heights Fire Company on Tuesday, May 3, 2022

Earlier Tuesday, Upper Darby Police had notified the public that the bear had been seen in wooded areas of Lansdowne and Clifton Heights. People were advised to stay away from Kent Park and other areas along Darby Creek, where traps were set to try to capture the bear.

The Pennsylvania Game Commission eventually hit the bear with a tranquilizer in the area of ​​the Big Lots store in Clifton Heights, but the animal got away. It wasn’t until nightfall that the animal was located and crews were able to get into position to capture it overnight.

6:50am update: We are pleased to report that the bear 🐻 was located overnight and has left the area. We would like to thank the gaming commission for their help.

The incident comes after a black bear was seen over the weekend in Plymouth Meeting, Montgomery County. Authorities issued a public alert, but no update was provided on whether that bear was captured.

Bear sightings have become increasingly common in southeastern Pennsylvania, especially during the spring and summer months, when the animals forage for food and seek to mate in sprawling territories. They have been seen in Philadelphia, Montgomery, Bucks, Delaware, and Chester County in recent years. The prevalence of cameras has also contributed to a greater awareness of their presence.

Although cases of black bears attacking people are rare, the animals can still be dangerous. The Game Commission has some tips to help residents keep critters out of their neighborhoods.

People are advised to stay away from black bears and are reminded that intentionally feeding black bears is illegal in Pennsylvania. When bears are fed, they become more comfortable around humans, which means they are more likely to be euthanized for public safety than released into the wild when captured.

The gaming commission recommends that people wait to take out trash until collection morning and regularly clean trash cans with bleach, especially if bears have become more common in surrounding areas.

It’s also a good idea to bring trash, bird feeders, and pet food indoors at night and avoid setting out food for other wildlife.