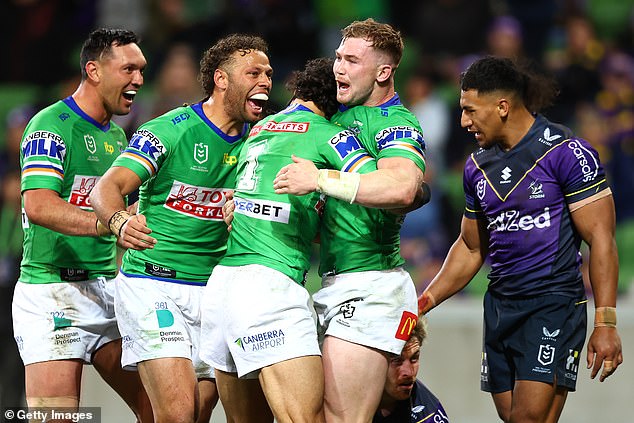 Fearless Canberra have finished Melbourne’s NRL season in impressive fashion, recording a 28-20 win in their elimination final to continue their dominance at AAMI Park thanks to a rare try.

An opportunistic attempt by winger Jordan Rapana with less than seven minutes remaining secured an upset victory for the eighth-ranked Raiders over fifth-placed Melbourne.

The scoring came under bizarre circumstances, when Jack Wighton found Xavier Savage in the middle of the dummy before the Raiders fullback was hit in an inning.

Savage had just enough time to throw the ball to Sebastian Kris, but the pass was deflected and slammed into the Raiders center’s head, before going over a Storm defender and landing just outside the tryout line.

In acres of space on the left wing, Rapana was the quickest to react as he crossed for Canberra’s fifth try of the game.

“It was probably the only thing that went right for us tonight,” Raiders coach Ricky Stuart said after the game.

‘It was a tough night. We just don’t get a good ball.

‘There were some calls that were difficult, we didn’t get any 50-50, and you need them. The way the players held up tonight makes me very proud to be their coach.

‘We had a lucky break on that header.’

The Raiders repelled a second-half comeback from Storm to push the perennial heavyweights out of the Finals and march into a semifinal matchup against Parramatta at CommBank Stadium next weekend. 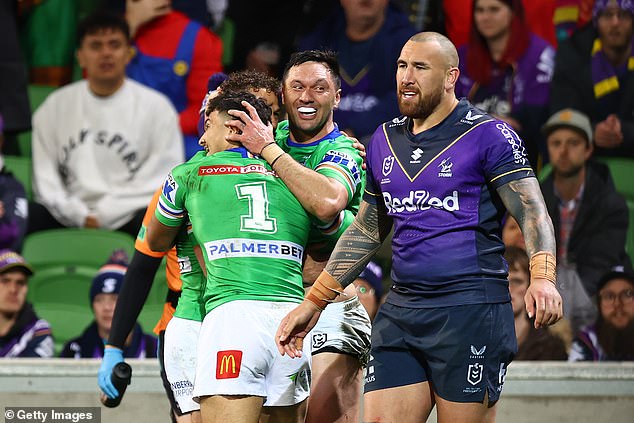 Jordan Rapana (right) won the game for the Raiders with a try with seven minutes remaining.

Canberra’s second row Hudson Young pounced on a Jack Wighton shot that widened Cameron Munster in the 65th minute, with Jamal Fogarty adding the extras as the visitors regained a 22-20 lead.

The Storm trailed 16-8 at halftime and looked down and out, but winger Xavier Coates scored his third try of the night and then giant prop Nelson Asofa-Solomona crashed in the 56th minute to put the hosts ahead 20-16.

But the brave Raiders refused to leave.

Winners in their last four visits to Melbourne, Canberra kept their composure to regain the lead and hold off the Storm. 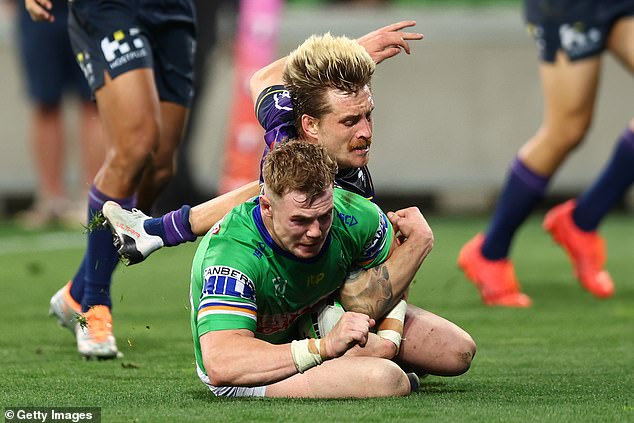 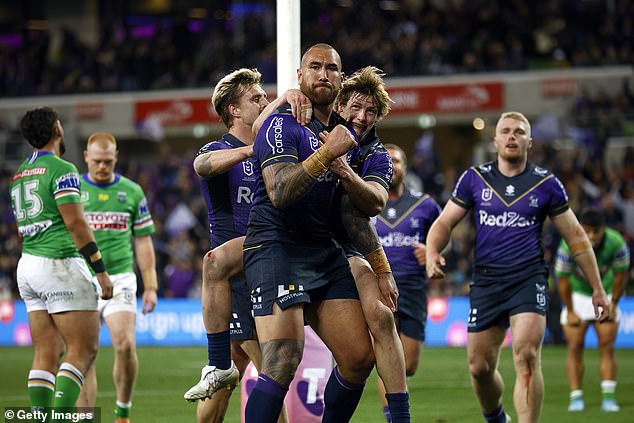 Canberra coach Ricky Stuart’s tactics targeted Nick Meaney, who was defending five eighths for the Storm, with the Raiders’ big men, led by Joe Tapine and Josh Papalii, doing a lot of damage.

The Raiders lacked territory in the first stanza, but they made almost every visit to the Melbourne half count.

After resisting pressure from the Storm early on, the Raiders lobbed the ball wide and young center Matt Timoko showed his pace and power, hitting Munster for a score in the seventh minute. 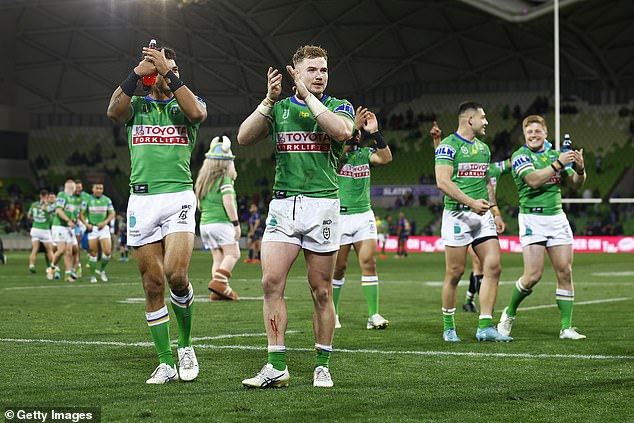 The Raiders have now won each of their last five trips to AAMI Park, a remarkable record. 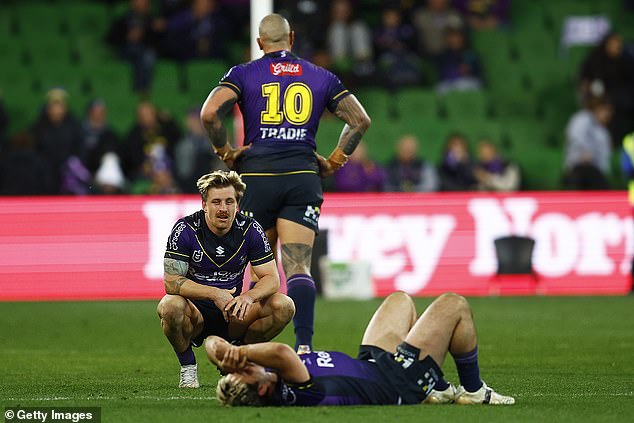 Two attempts by Coates put his team ahead 8-4, but the Raiders crossed twice in the final nine minutes of the half to take an eight-point lead going into halftime.

Running back Jamal Fogarty and then Elliott Whitehead broke through the weak defense, which would have infuriated Storm coach Craig Bellamy.

Coates planted the ball across the line for his third down four minutes into the second half after a break from Marion Seve as the Storm only trailed by two points.

And then the Asofa-Solomona effort put the home side ahead, but it was short-lived and the green machine finished with a flourish to send Storm packing.