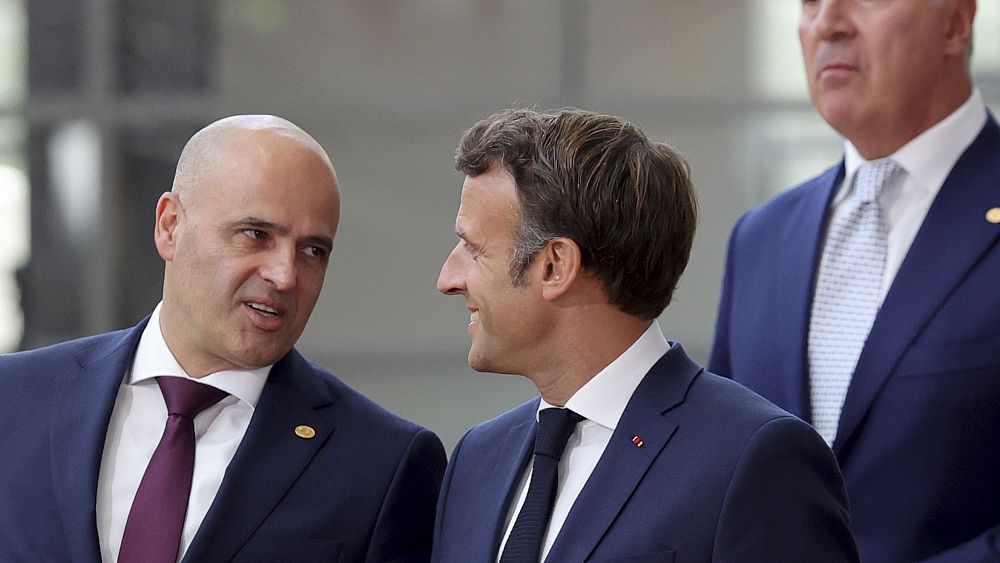 The long-running saga around Bulgaria’s veto of North Macedonia starting negotiations to join the European Union appeared to be moving towards a resolution on Wednesday, writes Georgi Karamfilov from Euronews Bulgaria. But just as an agreement appeared on the horizon, the Bulgarian government collapsed and covered up the issue again with uncertainty.

The issue of the Bulgarian “veto” on the start of negotiations for North Macedonia to join the EU has been on the agenda in Brussels for the last two years.

During this period, Sofia has been repeatedly visited by various representatives of the European Commission.

In particular, Oliver Varhelyi, European Commissioner for Neighborhood and Enlargement, who tried to unravel the dispute. But no significant progress was made.

Now, however, a so-called “French proposal” has been put on the table to resolve the dispute between the two countries in a way that would allow North Macedonia to obtain a framework for its accession negotiations and start working on it, but also to give an assurance to Bulgaria’s concerns about Skopje’s possible accession to the bloc of 27 countries.

You can read more about why Bulgaria has vetoed North Macedonia’s bid to join the EU here.

The term “French proposal”, which has become synonymous in Bulgaria in recent days, does not actually mean that the proposal is specifically made by the French government. Rather, it was “conceived” during the French presidency of the European Council, which ends at the end of June. Brussels’ goal was to find a resolution by the end of the French presidency.

In essence, the proposal of the French presidency is based on Bulgaria allowing Skopje to start the integration process now or at least in the foreseeable future. In exchange, the European Commission will compromise its principled position not to get involved in bilateral disputes.

Thus, the European Commission will become the guarantee of the conditions established for North Macedonia, placing them in the very framework of negotiation that will be provided to Skopje. It includes requirements such as the inclusion of Bulgarians in the North Macedonian constitution, the protection of the rights and interests of minorities in North Macedonia, the insertion of a clear commitment to combating hate speech in the country and the resolution of the Macedonian language issue in a way that does not directly affect the Bulgarian position on it.

A key point of the French proposal is the monitoring by the European Commission of North Macedonia’s compliance with previous bilateral treaties with EU countries: the Prespa agreement with Greece and the Treaty of Friendship, Neighborhood and Cooperation with Bulgaria.

However, French President Emmanuel Macron’s ambitions to provide a solution to the impasse have already managed to cause internal political turmoil in Bulgaria.

They were even cited as a reason for the collapse of the country’s ruling coalition after TV star Slavi Trifonov’s “There Are Such People” (ITN) party began accusing the government that, under French pressure, the prime minister Bulgarian, Kiril Petkov, had agreed to lift the veto.

In a video statement, Trifonov said that the “French proposal” requires Bulgaria to lift the veto at the beginning of the negotiations and Brussels will give a possible guarantee that Bulgaria’s demands will be respected afterwards. However, his words were refuted and described as insinuations. It also became clear that Bulgaria’s outgoing Foreign Minister Teodora Genchovska (from Slavi Trifonov’s party) has also worked on the French proposal.

Shortly after receiving the proposal, Bulgarian Prime Minister Petkov delegated responsibility for its adoption to parliament.

At the moment, the proposal has been submitted to the Bulgarian National Assembly and is expected to be examined by the parliamentary committee for foreign affairs.

However, there is no scheduled committee meeting yet. This drew criticism from Bulgarian President Rumen Radev, who said the proposal was “the best and fairest” so far.

Considering that the Petkov government lost its parliamentary majority and then, on Wednesday, a confidence vote, there is a good chance that new elections will be held. All this means that there is a real risk that the proposal will not be considered at all.