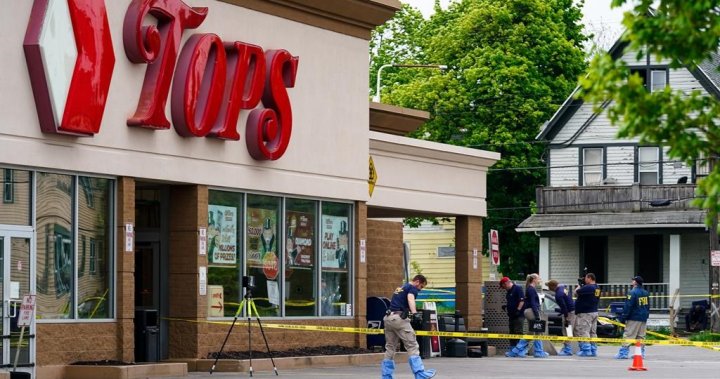 The white gunman accused of killing 10 black people in a racist mass shooting at a Buffalo supermarket pleaded not guilty Monday to federal hate crime charges that carry the death penalty.

The shooter was indicted last week on hate crimes and weapons charges. The guilty plea was entered in court by his attorney, who said he hoped to settle the case before trial. Wearing an orange jumpsuit and shackles, Payton Gendron remained silent during the brief appearance.

Mass shooting at a Buffalo supermarket: Here’s what we know so far

Attorney General Merrick Garland, who halted federal executions last year, has not ruled out seeking the death penalty against the gunman, who turned 19 in June. The Justice Department said a decision on whether to seek the death penalty would come later.

After livestreaming the May 14 attack, the shooter was arrested just outside the entrance to the Tops Friendly supermarket. Wearing a bulletproof vest, he had opened fire on weekend shoppers and employees in the parking lot and inside the store. Three people were injured.

“We all know that he is guilty. We saw what he did,” Zeneta Everhart said after the court proceeding. Her son, Zaire Goodman, was injured in the attack. “The world saw what he did. He published what he did”.

The store reopened to the public last week, two months after the attack.

Buffalo Mass Shooting: Reverend Al Sharpton Says Despite Hate Crimes No One In City Rioted – May 28, 2022

Investigators say the shooter drove for more than three hours from his home in Conklin, New York, to a busy grocery store chosen for its location in a predominantly black neighborhood, intending to kill as many black people as possible. He was motivated, they said, by white supremacist beliefs he described in online diary entries.

He wrote as early as November about staging a live-streamed attack, practiced shooting from his car and did a store reconnaissance two months before carrying out the plans, according to the briefs.

The indictment seeks the forfeiture of an extensive arsenal recovered from the shooter’s car and home. It includes the Bushmaster XM-15 semi-automatic rifle used in the shootout and a loaded 12-gauge shotgun and a loaded bolt-action rifle and ammunition taken from the car. Authorities seized additional ammunition and firearm accessories from his home.