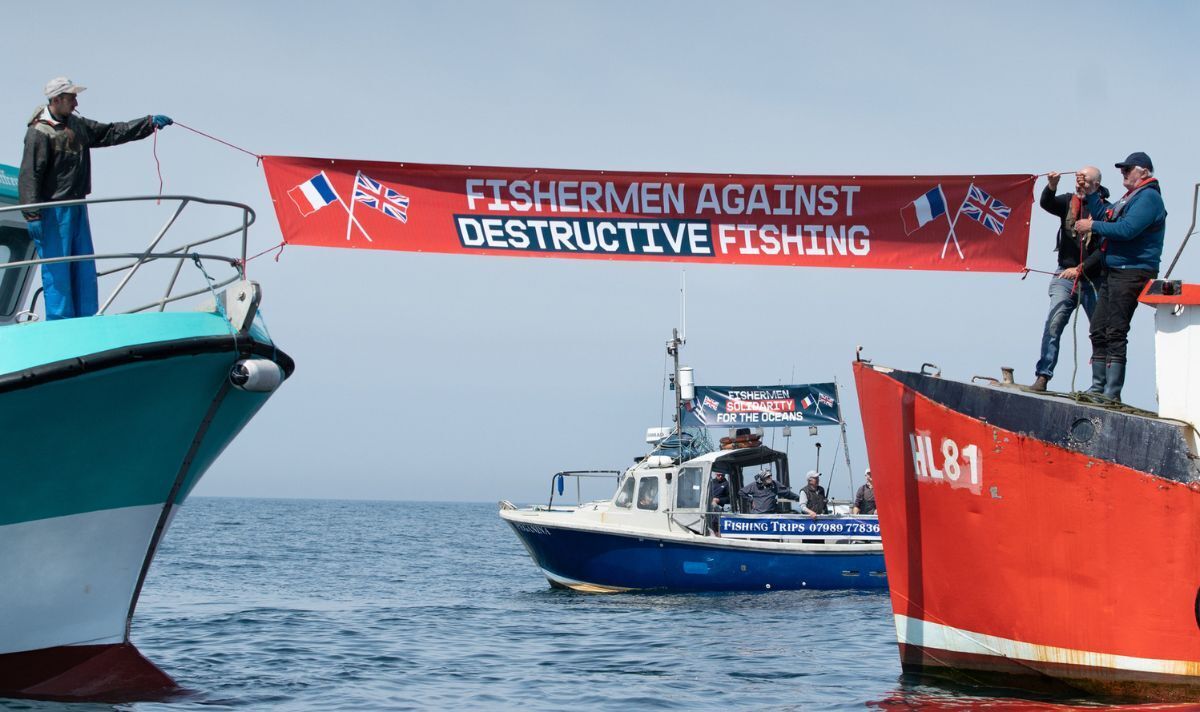 They were joined by activists from Greenpeace, Bloom and Pleine Mer, who warned that the fishing practices “threaten livelihoods and destroy the marine environment”. Fishing boats from both countries, which have been at loggerheads over post-Brexit fishing licences, met at the Bassurelle Sandbank Marine Protected Area (MPA) halfway between France and the UK. They held talks at sea to share their experiences of how industrial fishing has destroyed fishing livelihoods and coastal communities in both the UK and France.

The fishermen carried banners showing mutual solidarity and even exchanged gifts to illustrate the new and growing partnership between French and British artisanal fishermen.

There were also protests in northern France’s main fishing port, Boulogne-sur-mer, with local Greenpeace groups displaying banners in their hometowns.

A joint Emergency Declaration, which was launched by Greenpeace last year, has been signed by the fishermen, as well as the three campaign groups involved in Monday’s protests.

This calls for fly shooting and super trawlers to be banned in large swathes of UK and French waters.

UK and French fishermen have joined forces to urge the government to introduce a ban on “destructive industrial vessels” that would save jobs and protect the marine environment.

Fiona Nicholls, Oceans Campaigner for Greenpeace UK, said: “It has been very encouraging to see fishermen from France and the UK joining the campaigners and discovering that we all have much more in common than we thought.

“On both sides of the Canal, fishing jobs are disappearing and politicians continue to ignore coastal communities.

“Instead, they are listening to the big companies that operate destructive industrial fishing vessels and continue to allow the most harmful forms of fishing at the expense of small-scale fishing fleets.

He added: “These fleets provide the vast majority of fishing jobs, but they are slowly disappearing as industrial fishing continues to damage the health of our oceans and destroy coastal communities.

“The UK government must end destructive industrial fishing in all UK protected areas, and it has the perfect opportunity to do so later this year when fishing licenses for all vessels are reviewed.”

A spokesperson for Bloom said: “Fly shooting embodies the technological hyper-efficiency of industrial fishing and the destruction it brings with it.

“In addition to devastating marine ecosystems, fly hunting dismantles the social fabric around the coasts, eradicates artisanal know-how and destroys the sustainable alternative that is artisanal fishing.

“The death of the Dunkirk fishing cooperative, completely ignored by politicians, was a direct consequence of electric fishing.

“We can’t afford to let that happen again.”

Greenpeace described this as a “welcome step in the right direction” as it shows there is a “political appetite for change”.

But the government has been urged to “show more ambition” to take action and “protect fishing jobs and our oceans before it’s too late”.