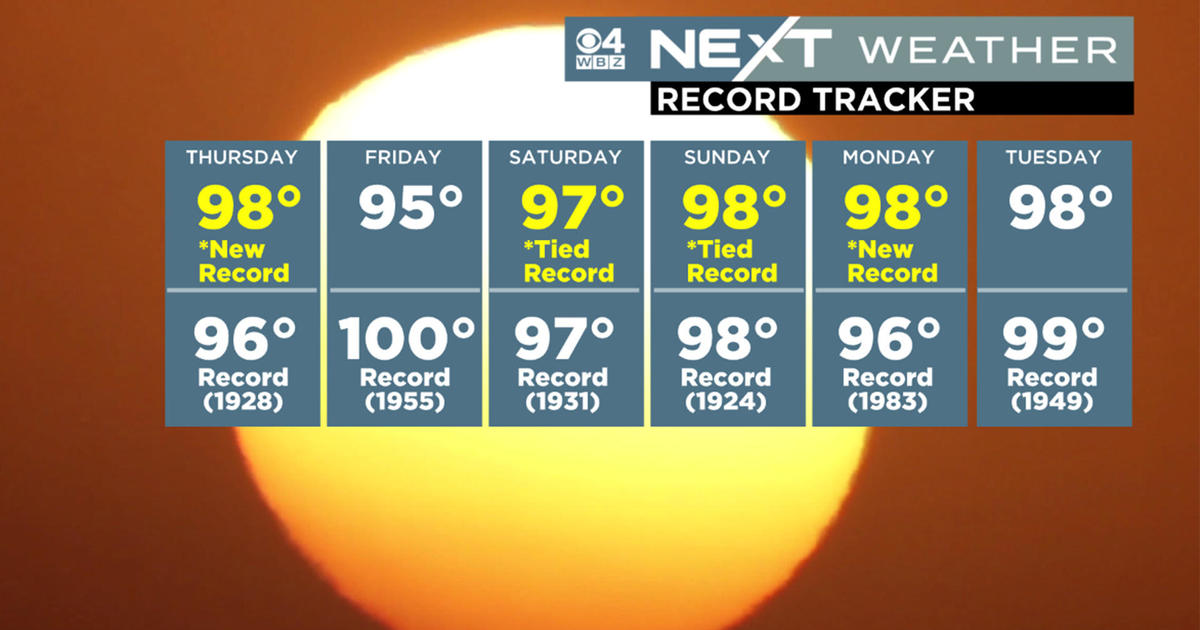 BOSTON – Wednesday was the day we’ve been waiting for…cooler, a little more comfortable, and finally a break from the excessive heat and humidity. The air conditioners have been running in overdrive…the beaches, wading pools and community pools have filled up and if you look around you don’t have to go far to see that the grass and open spaces have become brown and crisp. Even in the shade, it’s been hard not to break a sweat!

Have you been feeling hotter than usual lately? Yes, and there’s a reason for that…we’re ending the “hottest” 30-day stretch on record for the city of Boston! Impressive, since the records date back to 1872.

An official heat wave is when you have three (or more) 90+ days in a row, but we started our first heat wave on July 19 and it lasted 7 days!

Our second heat wave began in many inland communities on August 2nd. Boston hit 90 that day as well, but was followed by an off-shore breeze the next day, restarting the potential for a heat wave on day 4. From then on… it’s like someone turned on an oven and it went cold! I would have forgotten to turn it off! Boston recorded its sixth straight day of 90+ heat, while many inland locations saw an eight-day heat wave Tuesday.

This is the first time in history that Boston has had two heat waves for six days in one season!

No matter how you slice it, the heat wave that ended Tuesday in Boston was record-breaking for several reasons.

Four of the six days of our last heat wave, the record has been tied or broken in Boston!

The mercury climbed into the mid to upper 90s every day, making it the second-longest streak of 95° or higher on record in the city of Boston. The number one spot is seven days in 1944.

It is also now one of the 10 hottest tranches on record with a past 8-day average high temperature of 94.2° (the 4th-hottest tranche, second only to the 1944 heat wave).

The average high for the last three weeks was also a record high of 92°!

The lack of rain recently is also likely a factor in the recent extreme temperatures. It is easier for temperatures to rise higher during drought conditions, as the soil can heat up faster with a lack of soil moisture. Boston is running more than nine inches below normal for rain this year. Since June 1, the city has only seen 3.21″ of rain! Severe drought conditions extend to nearly 60% of the state.

While we finally saw the change in temperatures, we are now looking for the dry pattern to change. While we do have some chance of showers over the next few days with temperatures in the 70s to 80s below zero…it looks like a more unsettled pattern will develop next week with the possibility of more widespread beneficial rain. Sure we could use it. Of course, we will continue to keep you updated on WBZ and CBS News Boston with any changes to the extended forecast.

Sarah Wroblewski is a meteorologist at WBZ-TV. Sarah has a bachelor’s degree in atmospheric science from the University of Massachusetts Lowell and is a Certified Broadcast Meteorologist (CBM) from the American Meteorological Society.