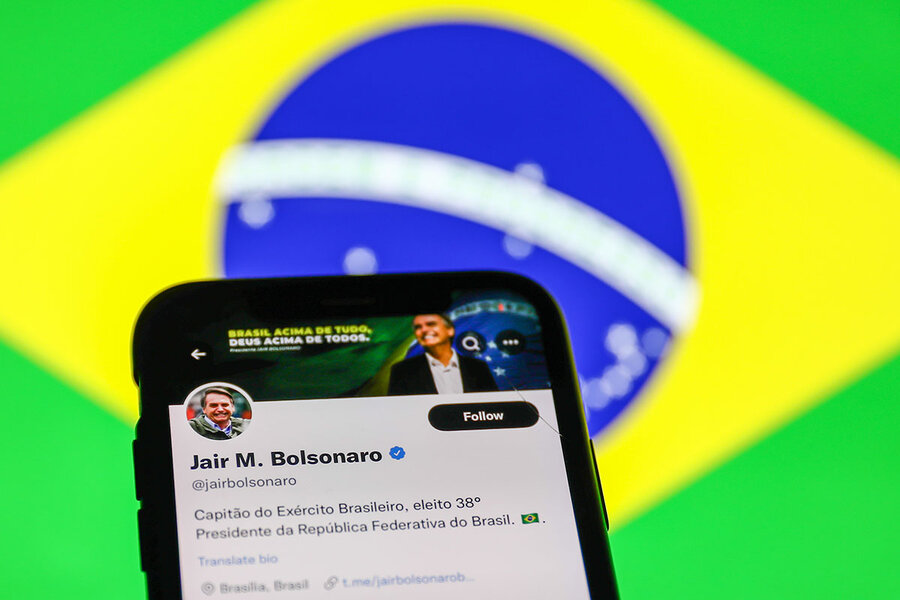 Mary Rose Filgueiras Lacerda confesses that she used to forward a lot of fake news.

“I thought they were true!” she says of the invented stories, and she is not the only one. Although fake news has challenged citizens and governments around the world, a 2020 study found that Brazilians fall for fake news more than people in other countries, including the United States.

Fake news has been a global scourge, but Brazilians’ heavy use of social media makes them particularly susceptible. Now, Brazil is trying to set an example to combat disinformation.

Brazil is one of the largest users of social networks in the world, with around 75% of the population on at least one platform. And the way the messages are delivered, which are based more on voice notes or images overwritten with text, makes them difficult to filter. Experts say low levels of education and mistrust of institutions combine with heavy use of social media to create a perfect breeding ground for disinformation here.

In 2018, a torrent of disinformation in favor of President Jair Bolsonaro helped propel the far-right candidate to an upset victory. And with Brazil gearing up for a close presidential race in October, fake news is already making the rounds on all platforms.

Mrs. Lacerda enters. With the help of a local news collective, she is trying to find out about reliable sources and how to spot misinformation. But it is not just the non-governmental organizations that carry out digital literacy training that are combating the problem. Congress proposed legislation, and the Supreme Court even weighed in.

Whenever a story with an outlandish headline came her way, Mary Rose Filgueiras Lacerda used to flip through it and forward it without a second thought.

But when flashy stories hit WhatsApp more often, he grew suspicious. “I thought, this is strange. Not everything can be true,” says Ms. Lacerda, a retiree who lives in Divinópolis, in the Brazilian state of Minas Gerais.

He decided to take action and signed up for a digital course that teaches Brazilians over 50 how to spot fake news. For five days, her daily messages urged her to read past the headlines and double-check her sources. Short YouTube videos taught you how to spot fakes and detailed how videos, images and memes can be manipulated.

Fake news has been a global scourge, but Brazilians’ heavy use of social media makes them particularly susceptible. Now, Brazil is trying to set an example to combat disinformation.

“I confess that I used to forward a lot of fake news because I thought it was true,” says Ms. Lacerda. “What I learned … showed me that we have to be vigilant.”

Ms. Lacerda’s concerns are not misplaced. Fake news and disinformation campaigns have hit Brazil hard in the last five years. And even with Brazil’s presidential election in October still months away, fake news about the upcoming election is already spreading on platforms like WhatsApp, Facebook, Telegram and TikTok.

Fake news has been a global scourge in recent years, with online messaging services and social media often dwarfing traditional media as sources of information. The phenomenon has left a deep mark in Brazil, where experts say low educational levels, mistrust of institutions and heavy use of social media have created a perfect breeding ground for misinformation.

Brazil is one of the largest social media users in the world, with around 159 million, or 75% of the population, on at least one platform. And the way messages are delivered, relying more on voice notes or images overwritten with text, makes it difficult to filter them en masse. In 2018, a torrent of disinformation in favor of President Jair Bolsonaro helped propel the far-right candidate to an upset victory.

And while a new wave of electoral misinformation is fueling concerns about Brazil’s democratic health, the South American giant may also be offering new avenues to combat it. Congress has proposed legislation to curb the spread of fake news. The Supreme Court is trying to force social networks to police users more effectively. Brazil’s electoral court has struck deals with tech giants to rule out fake news and report those who create it to authorities.

And nongovernmental organizations are working to teach digital literacy and fact-checking, hoping that, with a little help, citizens can identify misinformation and play a central role in stopping its spread in their communities.

“We ended up with multiple versions of the truth circulating,” says Valerie Wirtschafter, a senior data analyst at The Brookings Institution, who studies disinformation in Brazil. “That’s problematic, because we know that an informed voter is what underpins democracy.”

Brazilian lawmakers have struggled for years to crack down on disinformation. And it’s not just about the election: misinformation flourished during the pandemic.

The legal efforts culminated in a sweeping legislative proposal known as the “Fake News Bill,” which seeks to criminalize the spread of fake news and force social media platforms to identify the financial backers of such posts. It would also limit the scope of mass messaging on platforms like WhatsApp.

But the legislation, first introduced in 2020, has drawn sharp criticism from tech companies, civil society and free speech advocates. Among his most vocal critics is President Jair Bolsonaro, who is under federal investigation for spreading misinformation on social media during the pandemic, including false claims that COVID-19 vaccines could increase the chances of contracting AIDS.

“The bill is not perfect, but it is a good start,” says Felipe Nunes, a political scientist at the Federal University of Minas Gerais who studies public opinion and social networks. “However, it has been met with a lot of resistance.”

Last month, the bill suffered a serious blow when Congress rejected an attempt to speed it up, making it unlikely to advance before the October vote.

Even if legislation criminalizing fake news moves forward, it may be difficult to implement because it would require global tech giants to usher in sweeping policy changes.

But the power of Brazil’s courts to compel tech platforms became apparent earlier this year, when a Supreme Court judge banned Telegram after Brazilian federal police repeatedly tried to contact the platform to request the removal of what it considered dangerous content. . Then the messaging app appeared, signing the rules governing disinformation put in place by election officials.

“We will only reach a solution when the platforms take responsibility for identifying and helping the authorities criminally punish those who produce fake news,” says Mr. Nunes.

For the fake news machine that churns out false information, the pandemic turned out to be a boon.

Producers of misleading content were able to hone their craft, says Sérgio Lüdtke, who heads the Comprova Project, a monitoring collective made up of 40 Brazilian media outlets and funded by Google and Meta, Facebook’s parent company.

“It was almost like a training ground for them on what works and what doesn’t,” says Mr. Lüdtke.

Those spreading disinformation are becoming more sophisticated, experts say. Fake messages have become increasingly subtle in the way they deliver their version of the news, omitting context or inviting misinterpretation rather than offering overtly fabricated stories. Brazilians fall for fake news more than their counterparts in other countries struggling with disinformation, such as the United States and Italy, a 2020 study found, with 73% believing at least one false claim during the pandemic.

This is making the work of initiatives like Comprova more thorough. The group is currently teaching the course that Lacerda and more than 2,200 others participated in, hoping to teach Brazilians who didn’t grow up digital natives how to spot fake news. “We have to find out how people interpret this misleading information and then deconstruct that narrative,” says Mr. Lüdtke.

Misinformation tends to reinforce the beliefs of voters who have already taken sides, not necessarily change someone’s position, a study led by Nunes found.

“Fake news is not good at manipulating people’s opinions,” he says. “It serves to involve and mobilize people in electoral processes. … It is electoral gold.”

Stand up to disinformation

Despite the widespread presence of fake news, those trying to combat the phenomenon are hopeful. Ariel Freitas works for Voz das Comunidades, a favelaPolitically based news organization that actively fights election misinformation.

“We are seeing all kinds of efforts to… mislead people,” says Mr. Freitas, whose team creates fact-checking posts to share on social media and the Voz das Comunidades mobile app. But “we are much better prepared than in 2018.”

For one thing, journalists and grassroots activists have honed their skills, he says, improving how they monitor misinformation and reach people through social media who may not see, read or hear the media. traditional.

Voz das Comunidades is about to launch an election-specific fact-checking project that will verify candidates’ claims and send push notifications warning of false information circulating on messaging apps and social media.

“We are stronger now. We can tackle misinformation,” adds Mr. Freitas.