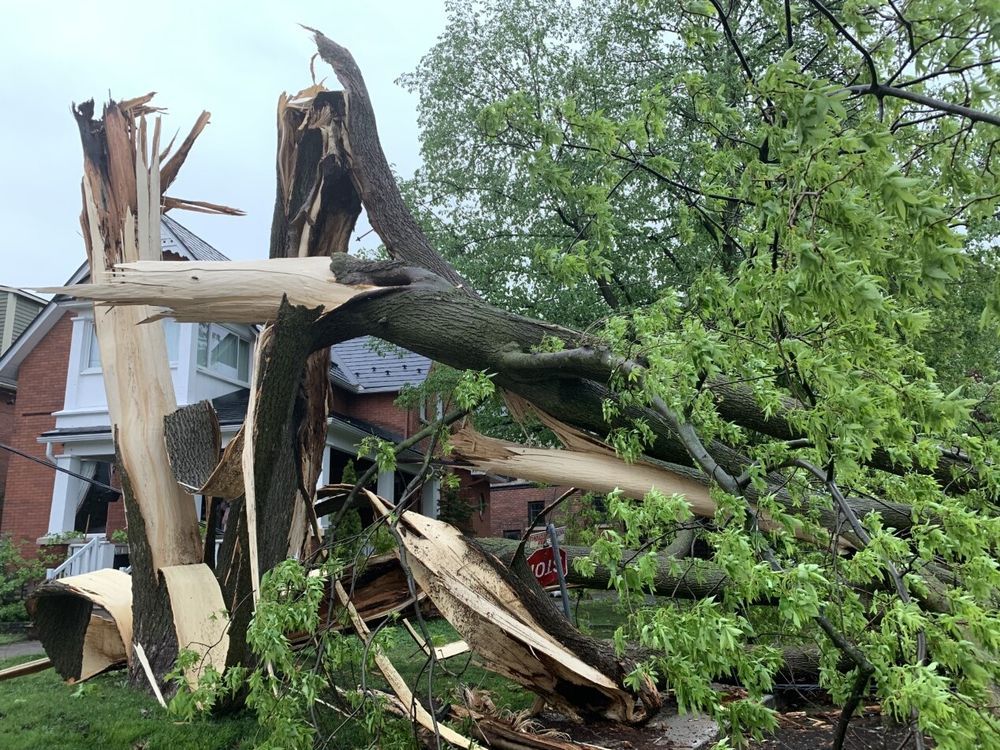 The first long weekend of the summer season got off to a tragic start in Ontario on Saturday after a powerful storm killed at least three people on its fast but intense path across the southern part of the province.

Tens of thousands of residents were also without power, according to utility company Hydro One, whose outage map showed roughly 1,700 outages that left more than 350,000 people in the dark as of Saturday night.

The first death occurred in the city of Brampton, Ontario, west of Toronto, where Peel Regional Police said a woman in her 70s was walking when the storm hit in the early afternoon. She was struck and killed by a tree, police said.

Further west, Ontario Provincial Police said one person was killed and two others injured when a tree fell on a camping trailer near Pinehurst Lake in the Waterloo region.

And Ottawa police said Saturday night that one person was killed in the city’s west end, but did not release further details.

“I am deeply saddened to learn of the tragic deaths of two people in Ontario as a result of today’s severe weather,” Ontario Premier Doug Ford said in an evening tweet before news of Ottawa’s death was confirmed. “My thoughts are with their families and friends and I offer my condolences on behalf of all Ontarians.”

Three other people suffered non-life-threatening injuries after trees fell on two golf carts in Zora Township, the OPP said in a separate tweet.

Fierce winds downed trees and power lines in a swath of the province stretching from Sarnia to Ottawa, at one point reaching 82 mph in Kitchener, Ontario. airport.

“It was like being in a car wash,” said West Ottawa resident Mike Edgerton, who noted that the storm hit five minutes after receiving a warning.

Kristina Martin said she was at home with her dog in the Old Ottawa South neighborhood when the storm hit.

“The lightning and storm brought down tons of power lines and tons of these big beautiful trees, which was pretty sad to see. It was definitely dramatic and everyone I know is safe,” he said.

Joseph Muglia, director of Hydro Ottawa, said more than 179,000, or about half of his customers, across the city had lost power.

“It is still early to try to establish what exactly we are dealing with here. We are probably dealing with a multi-day event,” she said at a news conference with the city’s mayor and emergency officials.

The storm was severe enough that Environment Canada issued a broadcast intrusive emergency alert that was broadcast to radio and television stations and mobile phones.

Environment Canada Meteorologist Daniel Liota said the storm was unusual because it covered such a large geographic area.

“It was a big deal. It’s their upper echelon of thunderstorms,” ​​he said in a telephone interview.

Mark Robinson, a forecaster, meteorologist and storm chaser for the Weather Network, said the storm took many experts by surprise because there usually isn’t enough heat and energy in the late morning or early afternoon, noting that many computer models they didn’t. pick it up

Robinson said the storm could be classified as an entitlement event, which he said has to cause damage over 450 kilometers and have winds of about 120 km/h.

“The trees around me roared when the wind blew, and I hadn’t heard that outside of a hurricane, so that’s how strong these winds were. I’ve been through 23 hurricanes, so I’m kind of used to that sound.”

The storm eventually reached Quebec, where it also left thousands of residents without power.

Hydro Quebec’s website showed about 357,000 customers without power as of 6 p.m., mostly in the Outaouais region of western Quebec and the Laurentians area north of Montreal. Residents of Lanaudiere, northeast of Montreal, were also affected.

Liota noted that severe thunderstorms were recently added to the warning system.

According to Alert Ready, which runs the warning system for Canadian governments, no severe thunderstorm warning has been issued on the system in the four years of data listed.

To trigger a broadcast intrusion alert for thunderstorms, you need to measure winds of at least 130 kilometers per hour, or hail at least three inches in diameter, which is about the size of a tennis ball, Liota said.

This report from The Canadian Press was first published on May 21, 2022.

— Archived by Ian Bickis and Maan Alhmidi in Toronto, Brieanna Charlebois in Vancouver, and Sidhartha Banergee in Montreal

Sign up for daily headline news from the Ottawa Citizen, a division of Postmedia Network Inc.

The next issue of the Ottawa Citizen Headline News will be in your inbox soon.