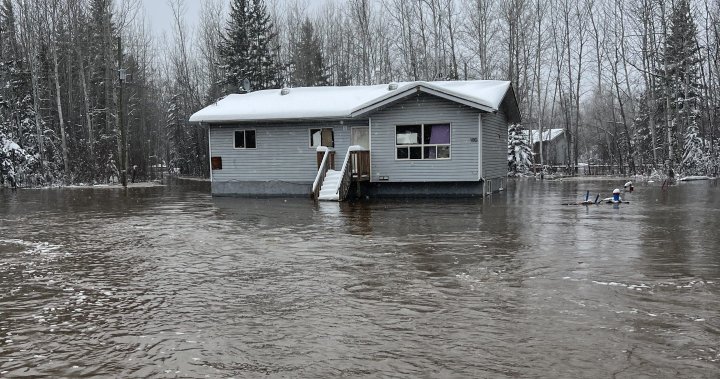 Excessive rainfall in early May has caused severe flooding, especially in Manitoba and Alberta, where thousands of people have been forced from their homes.

Heavy rains are caused by warming and increasingly volatile weather. Add in decades of paving wetlands and forests, considered nature’s sponges, and you have all the ingredients for catastrophic flooding in Canada, says a United Nations report.

The report goes on to state that flooding is the most frequent and costly natural disaster in Canada. For example, the BC floods last November are still on track to become the costliest natural disaster in the province’s history, costing the federal government a historic $5 billion. However, the total cost is likely to be much higher as officials continue to assess the scale of the destruction.

3:55
BC Floods: The Devastation and the Road to Recovery

BC Floods: The Devastation and the Road to Recovery – December 28, 2021

Since global warming is not slowing down, the climate conversation is focused on how people and cities can live with climate change as it occurs.

Here’s a look at what’s happening in each of the spring flood-affected provinces and how some communities are affected.

Manitoba will continue to factor in spring flooding as another two or three storms are expected to hit in the next 10 days, Farnell said.

Since late April and early May, communities across the province have been battling the high waters of the Red River and its tributaries.

“It’s been such a wet spring … and while we may not see worse flooding, it will take a long time to get better,” Farnell said.

Among the many other communities affected by the flooding, the town of Arborg, 100km north of Winnipeg in the Interlake region, has a major underwater intersection and some houses inundated in the rural township of Bifrost.

The hardest hit area is Peguis First Nation, 100 miles north of Winnipeg, where some 1,800 people have been evacuated from their homes surrounded or flooded by the rising Fisher River. The river’s water level has dropped in recent days, but with more rain in the forecast this week it is likely to rise again.

“One thing about the Red River Valley and the Red River, particularly through Winnipeg and much of southern Manitoba… is that it tends to flood every few years. But this, I think, is the worst they’ve seen in at least a couple of decades,” Farnell said.

He said not much can be done, adding that these rivers tend to change course.

“When we have developments in cities like Winnipeg, right on the banks of these rivers, then you don’t have the ability to change course. All the water flows from point A to point B and, in some cases, submerges everything. And that includes things like infrastructure, like roads, that are now underwater in parts of Manitoba,” Farnell explained.

Flooding in northern Alberta this week has prompted three communities to issue a local state of emergency, prompting residents to be asked to evacuate.

Precipitation and melting ice have caused flooding in that area, provincial officials said.

A flood warning was also issued for Sousa Creek last Friday, with floodwaters expected to rise over the next four to five days.

Water levels appeared to have peaked, and the province said Monday that with continued snow melt and saturated soil, the waters are not expected to recede for days. They said it could be months before many evacuees return home.

An evacuation order was issued for the entire town of Hay River in the Northwest Territories Wednesday night as floodwaters reached the center of the community.

Chief April Martel of the neighboring K’atl’odeeche First Nation ordered her entire community to leave and head to the community of Enterprise, south of Hay River.

Some 4,000 residents in total have been affected.

Beyond Emissions: How Canada Can Weather the Floods of the Future

Hay River residents were told to head to higher ground or to the town’s community center. Yellowknife opened its multiplex as an evacuation center for people leaving the Hay River by road in search of safety.

There were reports of power outages in parts of the Hay River as the water level rose. On Wednesday night, the Department of Infrastructure had declared the city’s only road link to Vale Island impassable and closed it.

The Town of Hay River asked anyone who has left their home but has not registered as an evacuee to call 1-833-699-0188 for assistance.

Mikey McBryan, general manager of NWT Buffalo Airways, which is based in Hay River, said the city’s airport, which is on Vale Island, had been closed.

The first signs of more trouble came Wednesday night when a section of ice broke off off the First Nation and a nearby bridge appeared to be in danger of flooding. The rupture sent a new surge of water into the Hay River.

Multiple residents reported being rescued by boat from downtown homes. The Whispering Willows senior facility was being evacuated when floodwaters reached rooms.

Areas of Hay River’s Old Town, such as Vale Island, were long considered to be at risk of flooding, which was one of the reasons for building the new downtown area; this type of flooding was thought to be highly unlikely at that location.

However, Hay River is essentially a miniature delta through which multiple river channels run, and conditions over the last few days have conspired to create a catastrophe.

City of Calgary prepares for possible flooding this year

Ice jamming in those canals has left the water with nowhere to go, and a weekend of rain and snow in the river basin ensured that more and more water cascaded into that system.

“There was a high volume of ice, a high volume of snow in the basin over the winter, and then this storm hit, initially as rain, which then flowed right into creeks and creeks, raising the water level immediately, and it was it parked over the entire basin,” GNWT hydrologist Shawne Kokelj said earlier this week.

“Now what we’re seeing is there’s still high water coming from upstream because a lot of rain fell there as well, and now some of the snow is melting and it’s still feeding a lot of these smaller streams.

– with archives from Krista Hessey of Global News The Canadian Press