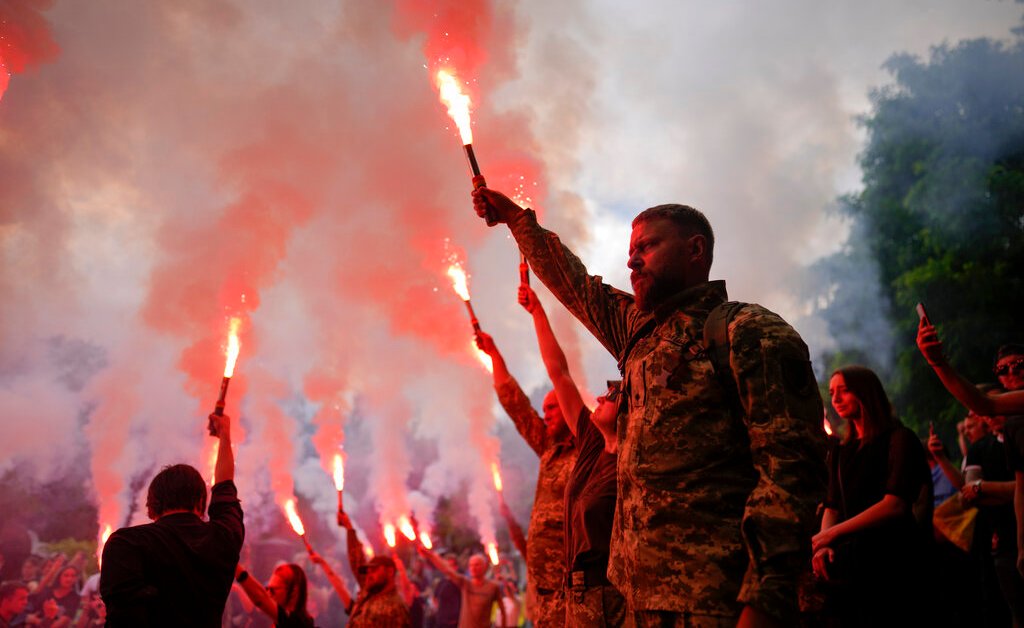 A A day after the Kremlin said that two American veterans captured by pro-Russian forces in Ukraine had committed war crimes and could face the death penalty, the Biden administration expressed outrage and called on Russia to respect international law.

The State Department said Tuesday that US officials are in talks with Russian authorities about the two men, Alexander Drueke, 39, and Andy Huynh, 29, who volunteered to fight with Ukrainian government forces. The United States is also in contact with the families of the two men, both from Alabama, and with the International Committee of the Red Cross, the department said.

Drueke and Huynh were detained by pro-Russian forces while fighting in eastern Ukraine, and their case raises concern about the status of thousands of foreign volunteers currently fighting in the war-torn country. Human rights observers and legal scholars say foreign fighters serving under Ukrainian military command are entitled to prisoner-of-war (POW) status and, in accordance with rules long established by the Geneva Conventions should not be processed.

But Russian officials have instead labeled all foreigners fighting alongside Ukrainians as “mercenaries,” a legal term that means not many international protections apply. Earlier this month, two British men and a Moroccan national caught fighting in Ukraine were sentenced to death by firing squad for “war crimes” in a legal process that was widely condemned as a “show trial” in the breakaway republic. pro-Russian from Donetsk.

Any combatant who claims to be a lawful combatant is entitled to a hearing to learn if his or her conduct violated the laws of war in any way, such as not wearing a uniform or some type of insignia while participating in military operations, said Mary Ellen O’. Connell, professor of international law at the University of Notre Dame. “American officials are right to insist that Russia comply with international law, which states that no person held by a foreign enemy during an armed conflict may be ill-treated,” she said. “It protects due process in any type of trial or hearing.”

If there are questions about their status as prisoners of war, under the terms of the Geneva Conventions, they are entitled to a decision by a competent court, said Rachel Denber, deputy director of the Europe and Central Asia division at Human Rights Watch. “They should be presumed to be prisoners of war and with all the rights of a prisoner of war until proven otherwise,” she said. “And the process to prove otherwise must be through a fair and competent court hearing. Denying someone due process is a serious violation of the Geneva Conventions.”

Apparently, no such tribunal has taken place. The Kremlin’s chief spokesman, Dmitry Peskov, admitted Monday that an investigation into Drueke and Huynh was still ongoing in an interview with NBC News. However, that didn’t stop Peskov from calling both men “soldiers of fortune.” Drueke and Huynh were involved in bombing and shooting at Russian forces, he said, and therefore must be “accountable for the crimes they have committed.”

The comments, which were the first from Moscow about the detained Americans, came days after Russian media published a video showing the men bound, blindfolded and expressing fears of execution. Asked if they could face the death penalty, Peskov replied that he “cannot guarantee anything” and that “it depends on the investigation.”

Read more: ‘Hope gives you the strength to act’. Portraits of Russians risking everything to support Ukraine

Peskov’s statements were condemned in Washington. “It is appalling that a public official in Russia would even suggest the death penalty for two American citizens who were in Ukraine,” National Security Council spokesman John Kirby told reporters at the White House on Tuesday. The administration is still gathering information, he said.

European officials have accused Russia of trying to distract attention from what they say are real war crimes being committed by its forces in Ukraine. They believe Moscow may be trying to lay the groundwork for a prisoner swap for Russian soldiers who have been arrested and convicted of rape, murder or other violent crimes during Russian President Vladimir Putin’s invasion of Ukraine nearly four months ago. . In May, a Ukrainian court sentenced a Russian soldier captured for shooting and killing an unarmed 62-year-old civilian to life in prison.

During an unannounced trip to Kyiv on Tuesday, US Attorney General Merrick Garland met with Ukraine’s top prosecutor and announced a War Crimes Accountability Team. “There is no hiding place for war criminals,” he said. “Working together with our domestic and international partners, the Justice Department will be relentless in our efforts to hold accountable all those complicit in the commission of war crimes, torture and other serious violations during the unprovoked conflict in Ukraine.”

The Ukrainian military repelled a weeks-long Russian offensive in and around the capital Kyiv, surprising better-equipped Russian forces, but now faces mounting fighting in the country’s east. At least 4,597 civilians, including more than 300 children, have been killed in Ukraine since February 24, according to the United Nations human rights office, though the agency acknowledges the true death toll is likely much higher.