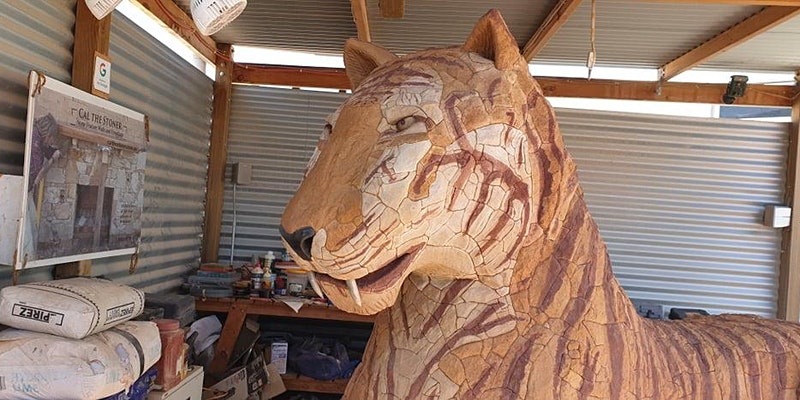 Cal the Stoner is a stonemason by trade and moved from Melbourne to the opal town of Andamooka in 2019 to have enough space to create his massive stone sculptures.

The last of these sculptures is the 1.5-ton Andamooka Tiger, which took Cal more than three years to complete.

Cal did not expect the tiger to take this long and claims that his most complex project before this one only took him ten months.

“I was stepping into the unknown with the tiger, it’s 3D and it doesn’t have measurements,” said Cal, whose last name is Prohasky but is better known by his nickname.

“I only had my eye to line up the masonry in the shape of a properly proportioned tiger, but 8,000 hours or three and a half years of work would have blown my mind if I’d known at the time.” The tiger is made from a unique vein of Grampians dimension sandstone from the pre-vegetation era, with colors of red and cream gold.

Cal uses his own ‘intricate’ technique to create his sculptures, with lines, textural features and color changes in the sculptures found naturally within the stone.

“The colors had to line up in the direction I wanted, and the stone was shaped like the outlines of the tiger shape, as they were all different.”

It took Cal Prohasky a year to sculpt just the tiger’s head.

Cal said the head was the most intricate part of the tiger and it took a year to complete.

Cal hadn’t planned on having opal claws when he started, so it was difficult to get 20 matching claws from leg to leg.

“I could go on and on, but to cut it short, I can say that out of those three and a half years there weren’t many nights that I didn’t build it in my sleep as well,” Cal said of the sculpture that was unknowingly completed in the Year of the Tiger.

“Over 300 people came through the day and night, and the progress photos online were the reason they came,” Cal said.

“However, the photos do not do justice to what it is like to see it in real life.”

The Andamooka Tiger is located at Cal’s Andamooka studio, 600km north of Adelaide, which is open most days between 2-4pm and the entrance fee is a cold beer. Finding the matching Andamooka Rainbow Matrix Opal for all 20 claws proved to be a challenge.

Cal has plans to have professional brochures made featuring the tiger, in an attempt to get major galleries around the world to display the sculpted piece.

“The common enemy of any Australian artist is cultural shaming where art is thought to be better and more exotic if it comes from abroad,” said Cal.

“However, I am not too worried, my work and I receive recognition and even flattering praise from stonemasons in other countries.”

Cal plans to visit Greece in July to do sculpture research and learn from Greek sculptors for his next project.

“The Goddess is next, and it will be my 16th intricate stone sculpture,” Cal said.

“My measurements came out a bit wrong, so instead of being 5’11, she’ll be an intimidating 6’7 in all her naked beauty.”