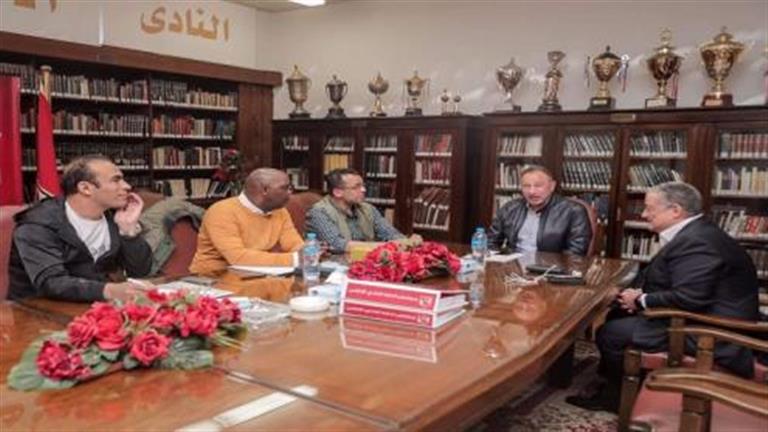 The Al-Ahly club is looking for its fifth coach in almost five years for the arrival of Mahmoud Al-Khatib as chairman of the club’s board of directors, who begins his second presidential term last November.

South African Betso Musimani terminated his contract by mutual agreement with Al-Ahly Club after 20 months, which represented the longest period for any manager during the presidential era of Mahmoud Al-Khatib, for which the Red Club began the search of his successor, which entered its tenth day.

Al-Ahly has stories and paradoxes from the departure of Hossam Al-Badri, the former Al-Ahly manager and the first to lose his job in the Al-Khatib era, to the termination of the contract of the South African manager, the fifth manager to leave in 4 years, which saw difficulties and setbacks in the completion of the contract and alternatives other than those specified.

The Al-Ahly club announced on 15 May 2018 that it accepted Hossam Al-Badri’s apology for not continuing in his position after the team lost 0-2 to Kampala City in the second round of the African Champions League and He will be last in his group to assign Ahmed Ayoub. the general coach, to manage the team temporarily.

Al-Ahly was associated with many names during this period, Argentine veteran Mauricio Bielsa and Czech Pavel Varba, for which the Red Club announced on its official website on May 19 of the same year that the candidates were 6 coaches from different nationalities “Argentine, Serbian, Portuguese, Brazilian, Dutch and Czech”. The same was announced by Sherif Fouad, the official spokesman, who said that they have a lot of experience and are very well paid.

Then Al-Ahly announced it, specifically on June 12, 2018, 28 days after the appointment of Frenchman Patrice Carteron as technical director of the team, after the Football Commission formed the auxiliary body of the new coach, who attended alone.

The 28-day period was the longest period in the Al-Khatib era, which saw the selection of a new manager and the worst results for a manager in the last four years, as he failed to win a championship and left in november. January 22, 2018 (163 days) after losing the final of the African Champions League and the Arab Champions League.

The presence of Mahmoud Al-Khatib, Reis Al-Ahly in Germany, to undergo spinal surgery, some linked to the nationality of the new Al-Ahly coach, to show the names of Cavilix Magat, his compatriot Thomas Schaaf, the Uruguayan José Daniel Carreño, the Portuguese Josevaldo Ferreira, the current coach of Zamalek and the Englishman Steve Bruce.

The name of the Argentine Ramón Díaz was linked again to Al-Ahly after his son Emiliano followed the official page of Al-Ahmar on the social network “Twitter”, repeating the same with what he did in May 2018 while his father was approached Al-Ahmar. Ahly technical direction.

One week after Cartian’s departure, Adly Al-Qaei, head of the Al-Ahly club’s hiring commission, specified the nationality of the coach and said that “he speaks Spanish or German”, to sign the Uruguayan Martín Lasarte on March 17. December 2018, 25 days after the departure of Cartian.

The 25-day period was the second longest during the Al-Khatib era, which saw him choose a new manager and had the second worst results after Caritron, where the Uruguayan won the league championship and was eliminated from the Liga. of African Champions since the 8th round with a historic defeat against Sundowns, and then left the Egyptian Cup from the round of 16 against Pyramids He settled for winning the league championship to leave on August 18, 2019 (244 days) , which is also the second least period to stay among his peers.

Al-Ahly has identified a list of 5 candidates to succeed Lasarti, according to Taha Ismail, former head of the Planning Committee, to link the Al-Ahly club this time with resounding names, led by German coach Roger Schmidt, Brazilian Abel Braga , the Croatian Zoran Mamić, the Dutchman Henk Tin Kat and the Italian international Luciano Spalletti and the Brazilian.

Al-Ahly said in an official statement posted on his website on August 31, 2019 that he agreed to Spalletti’s contractual and material requests, but asked to postpone receiving the assignment after ending his crisis with his current club and did not specify. a clear date. for salvation, so the negotiations did not materialize due to lack of time, which is the same thing that happened with the Brazilian Mano, who has approved his requests, but has asked for rest for the moment, and will start driving in January 2020 .

Mano signed a week later, on September 7, to train Palmeiras Club, while Al-Ahly hired Swiss Rene Weiler at the end of August to explain to Taha Ismail: “Some may be interested in traditional specifications, the main one being championships, and some might look at a 60-year-old coach, for example, and he’s won 20 championships; But at Al-Ahly, we had a different point of view and we wanted to sign a young coach who has the ambition to achieve success for himself and Al-Ahly, a coach who works on the pitch and on the pitch.”

The 13-day period in which Al-Ahly hired Feiler came the second fastest time in which the Red Club hired a coach and had successes at the local or African level in which they reached the semi-finals and the team continued to compete in the cup and winning the Egyptian League and the Super League before his departure on September 24, 2020 (390 days), which is also the second longest tenure for a manager in the last four years.

The fastest and most successful

Following Feiler’s departure, Al-Ahly headed to the African Champions League semi-finals, to return the Spalletti name, according to a report published on the Italian website inews24, to which other names, such as the German’s, were linked. Heiko Herrlich and the Argentinian Rodolfo. Arruabarina, and while things turned to Mohamed Youssef, the technical director, to lead the task, and indeed they congratulated him in an analytical study of the Al-Ahly channel, but the club came out and denied it in an official statement.

Al-Ahly went to hire Beto Mosimane on October 1, 2020, in the fastest contract in history, which did not take even a week to achieve the sequence and be the owner of the shortest contract period and the longest period of permanence (620 days) and the owner of the biggest digital hits with the team.