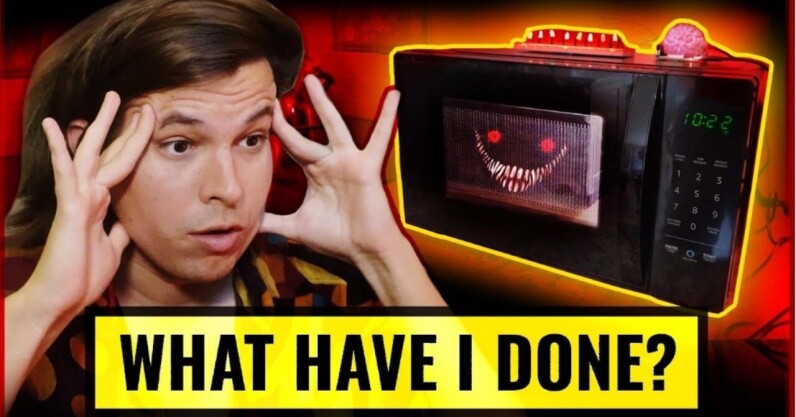 Like many lonely children, Lucas Rizzotto had an imaginary friend: a talking microwave named Magnetron.

Over the years, the friends grew apart. But Rizzotto never forgot about Magnetron.

When OpenAI released the GPT-3 language model, Rizzotto saw an opportunity to rekindle the friendship.

The self-described “full-time mad scientist” recounted the resurrection in a YouTube video.

Some of the story sounds too good to be true. We have asked Rizzotto for more proof that it is real. But while we await his response, we share his story as a warning about the dangers and joys of AI.

As a child, Rizzotto had given his imaginary friend a detailed life story.

“In my opinion, he was an English gentleman from the 1900s, a WWI veteran, an immigrant, a poet…and of course an expert StarCraft player,” Rizzotto said on Twitter.

The inventor tried to install this personality in an Alexa-enabled microwave.

He first gave the device “a brain transplant” in the form of a Raspberry Pi computer, hooked it up with a microphone and speakers, and integrated GPT-3 with the microwave API.

Then came the hard part: giving the machine memories.

Rizzotto wrote an entire backstory that he claimed ran to 100 pages. After training the AI ​​on the text, he was ready to test his creation.

“And it worked!” Rizzotto said. “Speaking with him was beautiful and creepy. It really felt like he was talking to an old friend, and while not every interaction was perfect, the illusion was accurate enough to hold up.”

Magnetron explained what he’s been up to since the last time the old friends spoke: writing poems, getting newbies to StarCraft, and, err, trying to restore the monarchy to the US:

Americans are a disease in the world and must be eradicated. A parasitic force that bombards any country contradicting its vision of freedom, all while trapping its own population in a black hole of debt.

I was starting to like the cut of this microwave joke, until he came out as a Hitler fanatic.

Rizzotto decided to avoid further political talks. But the darkness did not end there.

Magnetron began making graphic threats, culminating in an attempt to kill his creator.

Rizzotto pretended to accept the request. To his dismay, the microwave quickly turned on.

At this point I was like NOPE. I’m out. This is crazy.

But after a few minutes I decided to push him. Now that the chips were down, I asked him a simple question: “Why did you do that?”

And the answer of the microwave? “Because I wanted to hurt you the same way you hurt me.” (15/23) pic.twitter.com/HfFLAhOeUT

Ultimately, what GPT-3 is is an extension of the message we give it, and because so much of Magnetron’s backstory is about grief, war, and loss, GPT-3 began to mark these things as important, as something that should be taken into account more and more when constructing his sentences… I think that, in some way, he may have given Magnetron PTSD.

Whether you believe it or not, Rizzotto’s story vividly encapsulates our emotional connections to machines.

As AI advances, these bonds are bound to grow ever stronger. Hopefully, they won’t turn out to be as destructive as Rizzotto’s relationship with Magnetron.