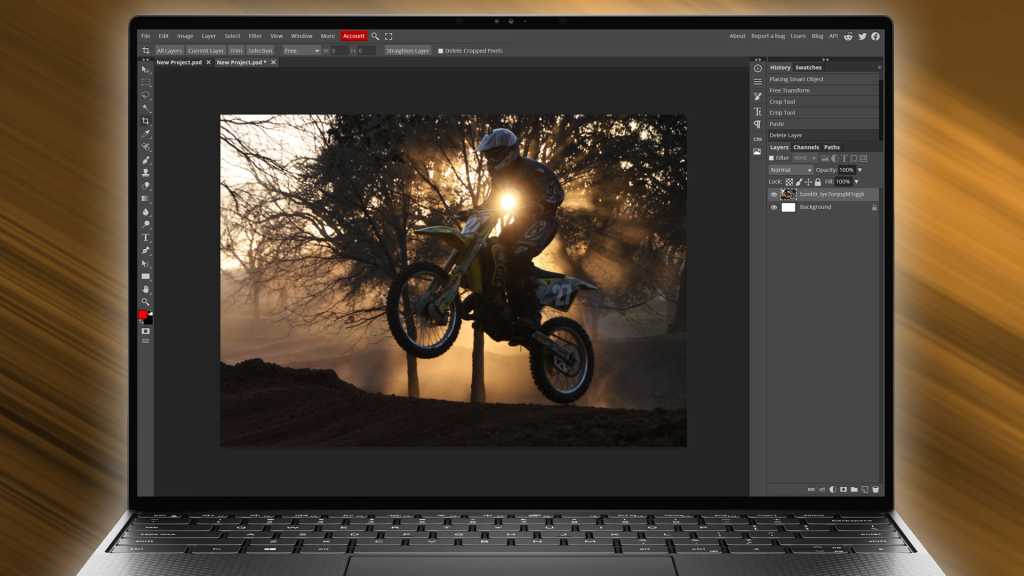 Photoshop is an absolute staple of modern graphic design, an industry standard for over 30 years. It’s also incredibly expensive: No longer available as a standalone program, you’ll pay Adobe a minimum of $120 each year to use it as part of a Creative Cloud subscription. That’s a lot of money to throw around, especially if you’re only using it for occasional photo editing.

There are low-cost alternatives to Photoshop, such as Adobe’s Photoshop Elements or Affinity Photo. Adobe is also in the early stages of testing a free (albeit neutralized) web version of Photoshop. But if you’re looking to get the job done without spending a dime, you have some amazing options. For even more free alternatives to popular software, be sure to check out our roundup of the best free software for your PC.

Photopea is a web-based editor, available in any browser. The big draw here is that, in addition to being free, its interface is based directly on Photoshop tools and menus. Adobe software veterans who aren’t looking to learn an entirely new system especially benefit here.

Being web-based, Photopea can’t take advantage of powerful hardware, and some keyboard shortcuts need to be relearned for long-time Photoshop users. But all things considered, it’s a remarkably effective alternative. Free users get access to all of the program’s tools, but a $3 per month plan unlocks a longer history and removes ads.

A complex but powerful alternative: GIMP

The GIMP image editor, a longtime favorite of Linux users, is now available on all platforms. While its interface isn’t exactly beginner-friendly, especially if you’re used to other programs, it’s at least as powerful as Photoshop for standard image-editing tasks.

GIMP is short for GNU Image Manipulation Program. GNU is short for “GNU is not Unix”. Unix is, you know what, we’re getting distracted. Just know that GIMP is at least as flexible as Photoshop in terms of capability (albeit without some of the cool additions in Creative Cloud), as long as you’re willing to dive into a wiki or two.

For quick and easy edits: Paint.NET

This Windows first edition program has been in continuous development for almost two decades. As its name suggests, it is a more powerful alternative to the built-in Paint tool that is still a staple of the operating system. But don’t be fooled by the name: Paint.NET is much closer to Photoshop than Paint in terms of capabilities.

While it lacks some of the more advanced graphic design tools in Adobe’s belt, Paint.NET can handle more or less any basic editing task, with full support for layers, action history, and even complex plugins. Just be prepared for a period of tweaking its interface, which favors floating menus over docked tools.

For the digital photographer: Photoscape X

Photoscape X is definitely more of a photo editor than an image editor, with a focus on easy-to-use tools to quickly enhance photos and add social media-approved extras. It’s particularly useful if you’re editing portraits and other people-focused photos.

Still, it includes some amazing tools, like a batch editor and a GIF maker. Photoscape X is a great option for someone who wants something like Photoshop, but doesn’t have years of experience to unlearn. The standard version is free, while the pro version with better text handling and more powerful filters is reasonably priced at $40.

For the digital artist: Krita

Unlike Photoscape, Krita is for users who need a tool for direct art creation: digital drawing, painting, inking, and so on. Its interface and tools are mostly geared toward artists, and its raster-based image editing capabilities aren’t all that impressive.

Krita’s layout should be familiar to Photoshop users, and its wide range of brush settings and vector tools should allow flexibility for artists who like to mix media. He even has some basic 2D animation tools. The editing program itself is free, with community development backed by plugins and tutorials available on its online store.